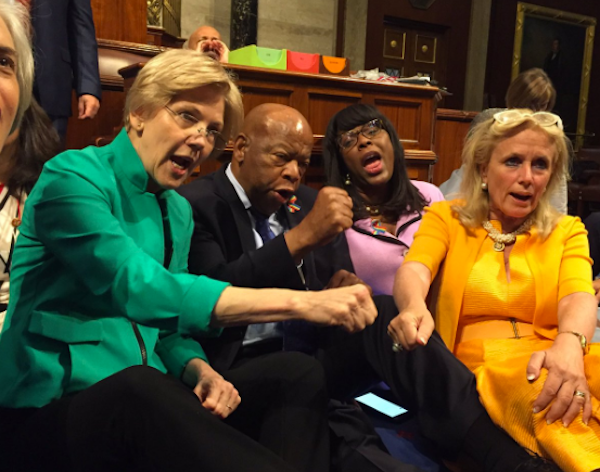 The Great Democratic Sit-In of 2016 is a case for maximum polarization.

John Lewis & Co. did not succeed in getting the Republican-controlled House to hold a vote on gun control measures. There is a vague hope that the sit-in will lend support to compromise legislation in the Senate that is being spearheaded by Susan Collins, but no one is holding their breath. At best, the sit-in drummed up publicity and gave the liberal base more reason to be fired up about gun control.

For a minority party in the age of hyper-polarization, this is seen as the most effective way to get policy passed: to drive turnout at the polls to swing control of Congress. There is no way through gridlock except to enhance gridlock—to literally sit in the way of the majority party. (Republicans are doing something similar in blocking the Supreme Court nomination of Merrick Garland.) Never mind that what the Democrats are asking for is exceedingly modest and broadly popular; they may have succeeded in pushing Republicans further to the right.

In this zero-sum atmosphere, new policy, for the most part, is no longer hammered out in the legislature. It’s determined at the polls.