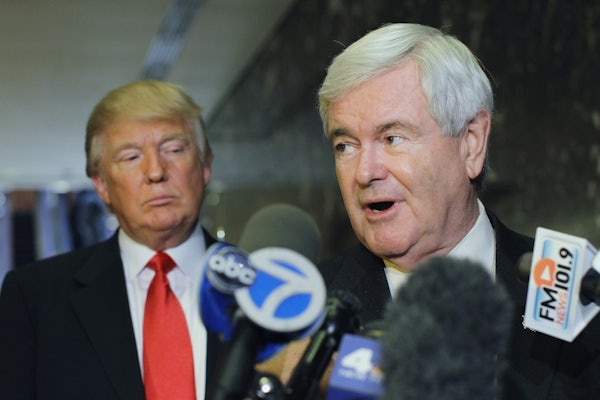 Like Donald Trump, Newt Gingrich is talking out of both sides of his mouth.

Friday morning, Donald Trump released a statement where he said some things about how “more needs to be done” so that black people can feel secure around police and in America. His statement, though notable for not being full of narcissistic crazy talk, was nevertheless a cynical ploy that distorted his opinions about policing and his history of making racially-charged remarks.

Friday afternoon, Newt Gingrich appeared on Facebook Live with Van Jones and took things even further than his possible running mate. “It’s more dangerous to be black in America,” he said. “It’s both more dangerous because of crime, which is the Chicago story. But it’s more dangerous in that you’re substantially more likely to be in a situation where the police don’t respect you where you could easily get killed. I think sometimes for whites it’s difficult to appreciate that.”

That is, aside from the characteristic euphemistic allusion to “black-on-black crime,” surprisingly on point. But it’s surprising because Gingrich has a long, long history with making racially-insensitive remarks and proposing racially-insensitive (at the very least) policies. In the Contract for America, as Emma Roller pointed out on Twitter, he called for the return of orphanages to take children away from single mothers. Throughout his career, he has been a connoisseur of the dog whistle, telling voters in New Hampshire he would go to the NAACP and tell them to “stop accepting food stamps and start accepting pay checks,” calling Obama “the food stamp president,” and in the 1990s routined lectured black Americans about their “bad habits,” which he felt prevented them from getting rich.

And, while Gingrich may have said something seemingly insightful to Van Jones, he also went on Fox & Friends this morning, where he blamed liberals and Black Lives Matter for the shooting in Dallas and said this:

So, no, like Donald Trump, Newt Gingrich does not suddenly get it.