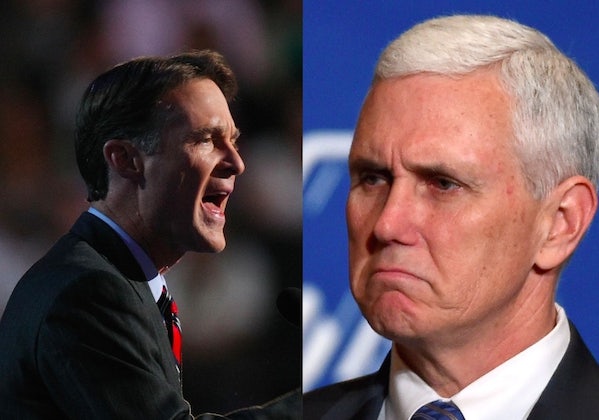 A big week for mediocre Hoosiers, thanks to Donald Trump.

Trump might just be a disastrous enough candidate to hand Democrats a governorship and a second senator in bright-red Indiana. The bad news is the second senator would be former senator Evan Bayh, whose reflexive and often sanctimonious Blue Dog-styled centrism frustrated grassroots Democrats for two undistinguished terms before he chose not to face voters in 2010.

On his way out the door Bayh talked a big game about how his decision reflected his belief that the Senate had become too dysfunctional to make being a senator worth it, rather than the belief that he couldn’t win re-election in a midterm year with the Tea Party at the height of its power.

“I love working for the people of Indiana, I love helping our citizens make the most of their lives,” Bayh said at the time. “But I do not love Congress.” He went on to become a lobbyist-in-all-but-name, a private equity adviser, and a Fox News contributor—not the kind of jobs you take if you’re a civic-minded politician looking for better ways to serve the public. In the years since, the Senate has if anything become even more dysfunctional, so it appears very much in hindsight like Bayh concocted a high-minded excuse for retiring when his political fortunes looked bleak, and has come out of retirement now that his fortunes look better.

His return coincides with the emergence of his state’s Republican governor, Mike Pence, as a leading contender to be Trump’s running mate. Normally that kind of thing might spook someone like Bayh out of running statewide. But Pence is if anything a more lackluster politician than Bayh—barely above water in his re-election campaign against Democrat John Gregg, hobbled by an intellect that rivals Rick Perry’s. So not only might Bayh prevail despite a prominent Hoosier at the top of the Republican ticket, but we might be treated to an “oops” moment on a general election debate stage.