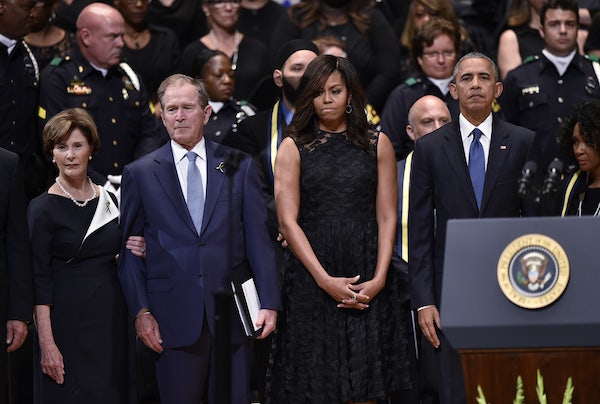 Speaking at a vigil for the five police officers killed in an ambush in Dallas last week, both George W. Bush and Barack Obama called for the country to resist division and to instead come together in mourning. Bush’s speech was touching and brief. “Too often we judge other groups by their worst examples, but judge ourselves by our best intentions,” he said, calling for empathy in the wake of tragedy. (Bush’s speech was more touching if you forgot that his doctrine of preemptive war was essentially based on judging other groups by their worst examples.)

Obama’s speech was a particular standout. It shared a theme with many of Obama’s best speeches: that “there isn’t liberal and conservative America; there is the United States of America,” as he put it way back in 2004. But eight years as mourner-in-chief has also made that theme more complex, as Obama has strived to hold the center in the midst of strife. In his speech, Obama strained to hold everyone accountable for the state of the country. “We know that bias remains,” Obama said. “We have all seen this bigotry in our own lives at some point....None of of us are entirely innocent. No institution is entirely immune. And that includes our police departments.”

Trump was never mentioned by name, but there was a strong sense in both speeches, which revolved around the theme of national unity, that his rhetoric was adding to the problem. “In this audience I see what’s possible when we realize we are one American family,” Bush said, “all deserving of equal treatment.” While Obama emphasized that, despite all of the tension and strife, things were better than they have been in decades. Trump, meanwhile, said today that “Dallas was just the beginning.”