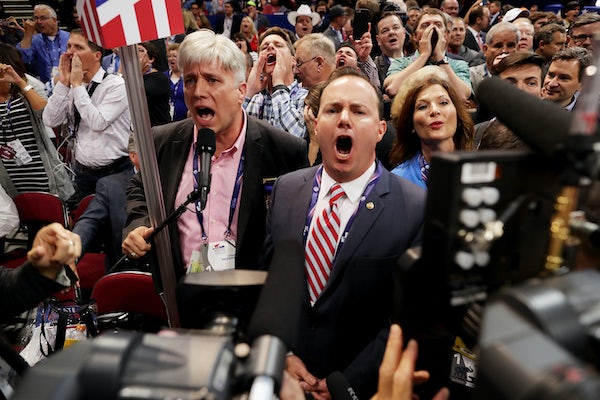 What do the RNC delegates pushing for a roll call vote really want?

After the RNC’s rules committee rejected the “unbind the delegates” (or #NeverTrump) movement’s attempt to unbind the delegates, there’s no doubt that, pending Donald Trump walking around Cleveland dressed as Hitler or some other catastrophe, Donald Trump will be the Republican nominee. Even if, by some miracle, the delegates were magically unbound, there would be only a minuscule chance that someone other than Trump would be the nominee.

So what then were the delegates who brought bedlam to the floor of the Quicken Loans Arena after? Some surely want a symbolic vote, so they can voice their objections to their party’s nominee and sleep slightly more soundly at night. But #NeverTrump is not just about Trump anymore—many people are upset about the method by which the rules committee blocked the move to “unbind the delegates” and are also concerned that the party’s platform—and nominee—aren’t conservative enough. (I know, I know.) Here’s a telling bit from the end of a Politico story about the troubles at the RNC (emphasis added):

The [unbind the delegates] activists saw their proposals—many of which were intended to push the party to the right—to reform the party’s rules squashed last week by a relentless Trump campaign and Republican National Committee combined effort to fend off significant changes.

And here’s Mike Lee, talking to Yahoo before the convention: “I hope whoever the nominee is going to be this time will in fact win over the delegates,” Lee said. “But rules like this are not going to help that.... I don’t view this as a ‘Never Trump’ effort. That isn’t the point. The point is there are delegates who have yet to be won over. He needs to win them over.”

During the chaos, Lee reiterated this point:

Seeking a roll call vote in Cleveland then is about more than changing the party’s nominee. It’s about revenge, from movement conservatives like Lee who feel like their voice was suppressed by RNC officials and committee members in a clumsy attempt to project party unity at the convention. And it’s about leverage: Lee said Trump needs to “win over” conservatives like him, which is to say, that he needs to make concessions to them. Bernie Sanders held out endorsing Hillary Clinton for weeks and was able to eke out a number of important policy concessions as a result: Conservatives like Lee may be out to stop Trump, but they’re signaling that they’ll settle for something similar.