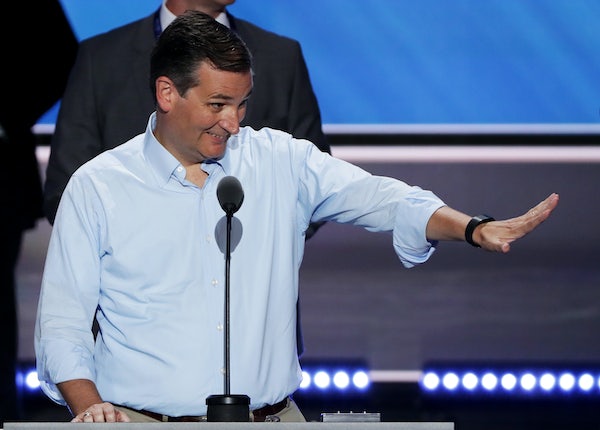 Ted Cruz is trapped between the past (two months ago), the present (the RNC), and the future (2020).

He still hasn’t endorsed Donald Trump for president, and it doesn’t look like he will do so when he takes the stage tonight at the Republican National Convention. When asked about the possibility of a Trump endorsement, fundraiser Mica Mosbacher told the AP, “I think they’re about 80 percent there.” Trump’s de facto campaign manager Paul Manafort spun the situation by assuring the AP that Cruz will make it clear that he is voting for Trump, but “how he says it, I don’t know.”

It’s no surprise that Cruz is hesitant to endorse Trump. Two and a half months ago, Trump accused Cruz’s father of playing a part in the Kennedy assassination, after all. Some of his supporters are still bitter about how things shook out. When Cruz addressed them in Cleveland on Wednesday afternoon, he told them that Trump won the election fair and square, but they still booed when his plane flew overhead.

Should Trump lose the 2016 election, Cruz knows that he’s sitting pretty in 2020—as long as he can play his cards right with both Trump’s voters and the parts of the GOP that will blame them if Trump loses catastrophically. It’s likely that Cruz will try to make everyone happy tonight: not endorsing Trump, but arguing that Trump is better than the alternative in 2016, while implying that Ted Cruz is the candidate of the future.