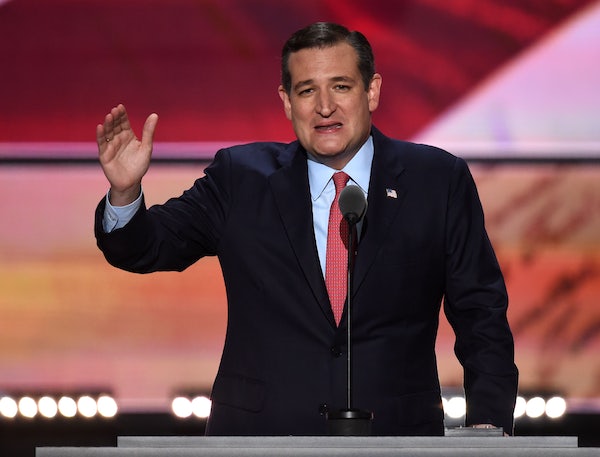 At first, Cruz’s speech sounded like one you could imagine Trump giving, if Trump had a decent speechwriter. It gripped the audience, starting with the tragic story of a 9-year-old girl whose father was killed by a sniper in Dallas. It hit on many of Trump’s core themes (and a few of Cruz’s too): We need to secure the borders. A conservative movement is sweeping the globe. A Hillary Clinton presidency would be a disaster for the country. Crime is sweeping the country. The Democrats are taking away our freedoms and our jobs.

It was a needle-threading speech. Cruz, in all his slimy glory, suggested to the crowd that he was just like Donald Trump, only a little more polished, so that the people who are supporting Trump in 2016 would support him in 2020.

And then he said this:

The crowd turned on a dime. It was a classic Cruz moment in that it was sneaky and too clever by half, and the crowd caught whiff of it a mile away. He couldn’t bring himself to tell them to vote for Trump, because what he really wanted to say was: “This is what you could have had.”

Chants of “We want Trump” erupted in the Quicken Loans Arena. When Cruz finally finished his speech, he was booed off the stage. It was possibly the most consequential moment of Cruz’s career—he chose honor, sort of, and that decision will either help him or haunt him in 2020 or 2024.

It was also the most raucous moment of the convention so far and Cruz didn’t even have to say “Lock her up”—just “Vote your conscience.”