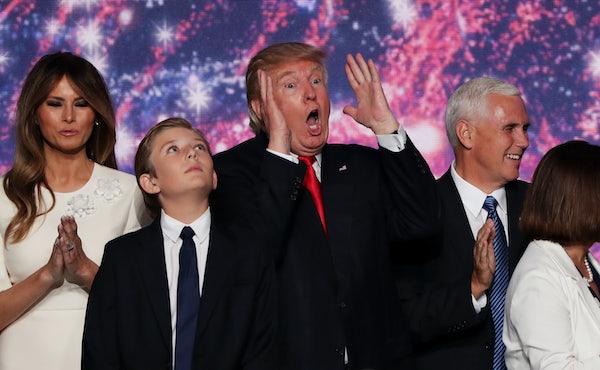 The morning after the convention.

As confetti and the flaccid remains of balloons are swept from the floor of the Quicken Loans Arena in Cleveland, as the delegates wake up groggy in their hotels from a four-day bender of hallucinatory political theater, as the echoes of Donald Trump’s words—“I am your voice”—linger in our collective consciousness like a bad dream, we are left to grope, through a growing fog of shame and regret, for an answer to the age-old question that accompanies any serious hangover: What in the hell just happened?

The moment that stands out with the greatest clarity, the episode for which this convention will be best remembered, is Ted Cruz’s refusal to endorse Trump in front of a crowd baying for his submission. It was easily the finest hour in Cruz’s career, and a reminder that the Republican Party has not gone entirely to the Trump side. And yet ... it was still a Ted Cruz speech, coated in a kind of oleaginous demagoguery. The speaker was still Ted Cruz, who did not happily welcome the crowd’s hate so much as grow stronger and more terrifying because of it, a malignant metastasis in action. If Cruz represents a third way between Trump and the GOP establishment, as Benjamin Wallace-Wells has suggested, then that hardly seems like a reason to hope.

The rest is a queasy blur. Melania Trump stealing Michelle Obama’s words. Rudy Giuliani red-faced and stabbing his fingers in the air. Chris Christie’s call-and-response with that crowd, the word “guilty” ringing out like a paean to mob justice. The chants of “Lock Her Up.” Laura Ingraham doing a maybe-Nazi salute. Donald Trump air-kissing Mike Pence. And permeating the memory of all these is Trump’s millenarian acceptance speech, an immersion tour of the conspiracy-inflected worldview that has animated his campaign, the enemy being a global order rotten with corruption and weakness that must be swept away and replaced.

It was an end-to-end embarrassment for the Republican Party. There did not seem to be a single statesman in attendance, only hucksters and petty tyrants. Trump is a Republican phenomenon and, as long as Hillary Clinton wins in the fall, a Republican problem. But the convention, a nearly weeklong showcase for one half of American political life, washed over us all. “I am your voice,” Trump declared. This was his attempt to present himself as a populist, as a megaphone for the people. But on this morning it reads like an indictment.