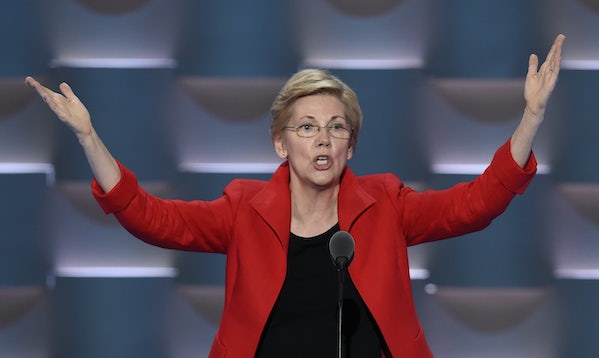 Elizabeth Warren did her best to convert Bernie Sanders’s supporters.

But it may not have been enough. Unlike Michelle Obama, who made no references to Bernie Sanders and pointedly praised Hillary Clinton for not being a sore loser after her 2008 primary loss, Warren started off with an ode to the Vermont senator: “Thank you, Bernie, thank you.” But she quickly transitioned to voicing her support for Clinton, declaring, “I’m with her. I’m with her.” Perhaps too quickly—a few betrayed hecklers began chanting, “We trusted you!”

That set the pattern for much of Warren’s speech. She praised President Obama’s tenure and made a strong argument for the Democratic Party’s achievements as a whole, suggesting that progressive change can happen even under a party apparatus that many of Sanders’s supporters distrust. But every mention of Hillary Clinton or Tim Kaine was met with scattered boos that, though isolated, could clearly be heard and disrupted the flow of her speech. She quickly went back to policy talk and her attacks on Trump.

On that score, Warren landed several punches. Trump seems to be particularly irked by Warren, and he probably didn’t like her subtly questioning his manhood—“What kind of man acts like this?”—as she listed off his various faults and frauds. “We are not going to be Donald Trump’s hate-filled America,” she declared.

She ended her speech with the uplifting refrain of “We’re With Her.” But she was more effective in bringing the party in agreement when she was demeaning Trump.