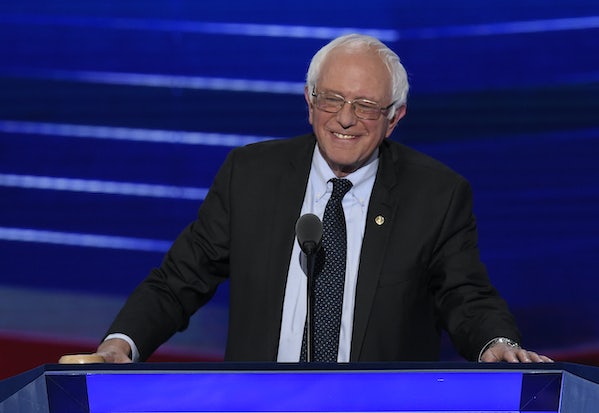 Bernie Sanders just did everything he could to convince his supporters to vote for Hillary Clinton.

The speech that Sanders delivered at the Democratic National Convention was, in many ways, similar to the one he gave endorsing Clinton two weeks ago. He argued that, although he and Clinton disagreed on many things, they had come together over the course of the Democratic Party’s platform fight. He argued that the two most important things his supporters can do are to stop Donald Trump and to keep their movement alive. And he declared that he was unequivocally and wholeheartedly supporting Hillary Clinton. Here’s how he ended the speech:

I have known Hillary Clinton for 25 years. I remember her as a great first lady who broke precedent in terms of the role that a first lady was supposed to play as she helped lead the fight for universal health care. I served with her in the United States Senate and know her as a fierce advocate for the rights of children.

Hillary Clinton will make an outstanding president and I am proud to stand with her here tonight.

But this was a very different speech than his original endorsement, if not in content, then in character. His endorsement of Clinton was unequivocal, but there was also something defeated to it—it felt like the end. Sanders’s DNC keynote was structured nearly perfectly to convince his supporters to join him in supporting Hillary Clinton.

Sanders came out to an incredible standing ovation, and for a moment he seemed like he was the nominee. He told the arena that he looked forward to their votes in roll call the next day—which almost sounded like he was keeping the door open. Sanders told his supporters that he was disappointed—more disappointed than they were, in fact—by the outcome of the primary.

Then he slowly started making the case that he and Clinton were not so different after all, and that the only path for his movement’s survival was a Clinton victory. The first half of the speech was mesmerizing because Sanders was walking a tightrope between keeping his supporters happy and nudging them towards Hillary Clinton—you could feel the room slowly but surely, with some stragglers, follow him, often a step or two behind. Certainly, there were many Clinton supporters who didn’t see that he was building to an endorsement; and there were certainly many Sanders supporters in Philadelphia who didn’t see it coming either. The room erupted when Sanders finally said Clinton’s name: “By these measures, any objective observer will conclude that—based on her ideas and her leadership—Hillary Clinton must become the next president of the United States. The choice is not even close.”

I have no idea what effect Sanders’s speech will have. There’s plenty of evidence that the convention hall in Philadelphia is not representative of the electorate and that most of Sanders’s supporters are already supporting Clinton. There’s also plenty of evidence that a small strata of Sanders’s base will continue to hold out and get plenty of coverage for doing so. But Sanders’s speech was powerful: It both walked his supporters through the stages of grief and made the case that Hillary Clinton is the only person who can truly continue the revolution he started.