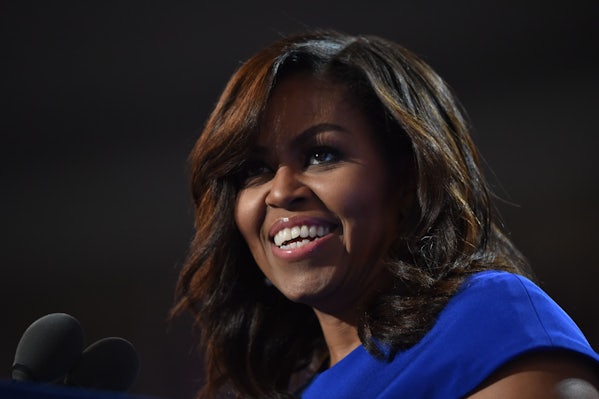 The Clintons came through for the Obamas in 2012. Last night Michelle Obama returned the favor.

In the midst of a tough re-election campaign that centered around a struggling economy, President Obama turned to Bill Clinton to give the nominating speech—and Clinton delivered, lending his high approval ratings and his legacy as a competent economic manager to the cause of defeating Mitt Romney. Obama at the time was at a low point, voters were tuning him out, and Clinton made the case for his re-election that Obama was unable to make himself, combining his gift for homespun oratory with a policy wonk’s command of the issues to dismantle Romney’s agenda. The speech lit up the convention hall. “He went long,” E.J. Dionne wrote at the time, “and they wanted him longer.”

The same could be said of Michelle Obama’s speech last night. It was much lighter on the policy, but was about as sophisticated a political speech as we have seen in the Obama era, giving voice to a public figure who has sometimes struggled to show her best side. This was not some obligatory quid pro quo—Michelle Obama at times seemed to channel a better version of Hillary Clinton, absorbing the themes of her campaign, internalizing them, and making them new, almost like a remix of a Clinton stump speech. Clinton’s long public track record fighting on behalf of women and families seemed like a reflection of Obama’s own political life. Even Clinton’s catchphrases—“I’m with her”, “cracks in the glass ceiling”—were woven in, with new life breathed into them. And in the ultimate tribute, Obama extended two of her strongest legacies to Clinton: that of a beloved role model and that of the first African-American first lady. The connection is made in this poignant passage:

...I wake up every morning in a house that was built by slaves.

And I watch my daughters, two beautiful, intelligent, black young women playing with their dogs on the White House lawn.

And because of Hillary Clinton, my daughters and all our sons and daughters now take for granted that a woman can be president of the United States.

The crowd—even the Bernie or Bust people!—wanted her longer. Has that ever happened before, in a speech about Hillary Clinton? It is especially remarkable when you compare it to another convention moment, in 2008, when Clinton gave a speech endorsing Barack Obama after a bruising primary. Throughout it all, Michelle Obama clapped politely, jaw clenched, looking for all the world like she couldn’t wait for Clinton to leave the stage.

This was true in a figurative sense as well. President Obama started his career as the anti-Bill Clinton, who was characterized in the 2008 primary as a cynical small-bore politician who had failed to make the lasting impact of a Reagan. But Obama soon discovered that, for all his political gifts, he couldn’t break free of the Clintons and leave them behind—in fact, he needed them. He especially needs them now, to protect and extend his legacy. For all the talk of Bernie’s revolution, the main story of this convention will be Obama handing back control of the party to the Clintons and the dawn of what one day may be known as the Obama-Clinton era. And the two sides, the two poles of the Democratic Party, first openly accepted their hyphenated fate in 2012.