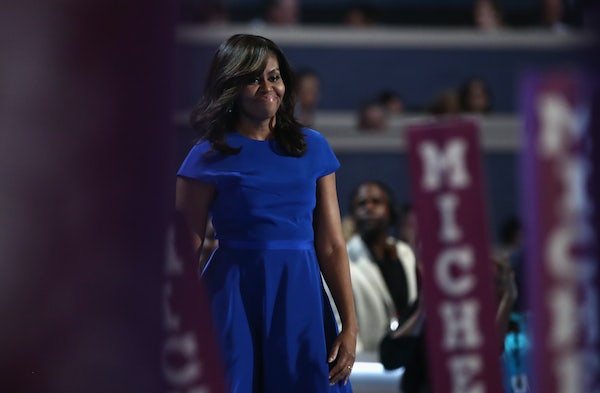 Obama has a special knack for driving some on the right absolutely bonkers. The “terrorist fist jab,” her tyrannical school lunch reforms, the head scarf she wore on a recent trip to Saudi Arabia—all received scathing coverage in the conservative press. But it is her comments about America that really drive conservatives up the wall. In a condescending 2015 Politico piece, Rich Lowry cited her famous comment that her husband’s nomination was the first time she felt proud of her country and concluded, “The first lady often strikes an aggrieved note when talking about her experience in America.” That a black woman would be critical of her country’s history or seemingly ungrateful for her place in it—that is the ultimate sin.

So it should come as no surprise that the centerpiece of the first lady’s 2016 DNC address—“I wake up every morning in a house that was built by slaves. And I watch my daughters, two beautiful, intelligent black young women, playing with their dogs on the White House lawn...”—has driven conservatives insane.

After Obama made those remarks, Twitter exploded with people doubting the veracity of her claim, which led many outlets to fact-check it. (It’s true.) Rush Limbaugh told the Obamas they need to get over slavery and compared American slavery to  a husband cheating on his wife (the lesson was the wife has to get over the slavery, er, cheating). Bill O’Reilly’s response has gotten the most attention, and is typical of much conservative commentary on the matter. “Slaves that worked there were well-fed and had decent lodgings provided by the government, which stopped hiring slave labor in 1802,” he said. “However, the feds did not forbid subcontractors from using slave labor. So, Michelle Obama is essentially correct in citing slaves as builders of the White House, but there were others working as well.” O’Reilly also noted that free blacks and immigrants also contributed to the project.