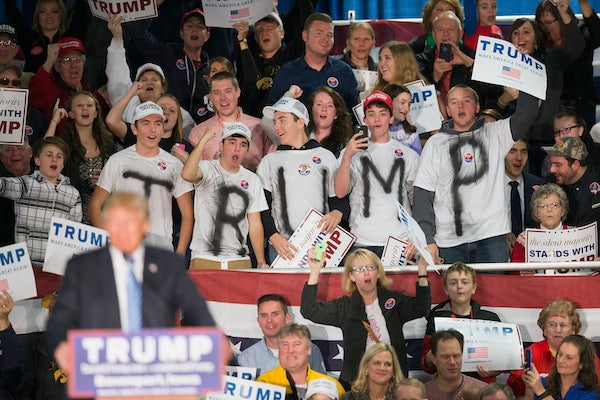 This is what happens when a non-white Trump supporter tries to join a campaign that doesn’t want him.

According to the polling, Trump is massively unpopular with non-white Americans. If that wasn’t a problem enough for his presidential bid, his campaign seems to be turning away the few non-whites who do show up. In Charlotte, North Carolina, Jake Anantha, a Republican college student whose parents immigrated from India, tried to attend a Trump rally but found he was racially profiled. As reported by the Charlotte Observer:

Anantha says he arrived at the Convention Center around 3:30 p.m., and when the crowd was admitted around 4:30 he took a position near the stage. He says he was standing there when a security staffer tapped his shoulder and asked him to come with him. He says the staffer said, “We know who you are. You’ve been at many other rallies.”

Despite Anantha’s protests that this was his first Trump rally and he was a supporter, police escorted him out. Because the event was private, the Trump staff could choose who was allowed to stay, and Anantha says police warned him not to cause a fuss and get arrested....

Anantha says he stood outside the Convention Center watching a stream of white people enter.

“I thought (Trump) was for all people. I don’t believe he is for all people anymore,” he said. “Why are all these white people allowed to attend and I’m not?”

Anantha’s experience shows how Trump’s campaign might be facing a vicious cycle when it comes to race: because his support is overwhelmingly white, the non-whites who join are viewed with suspicion, which drives them away.