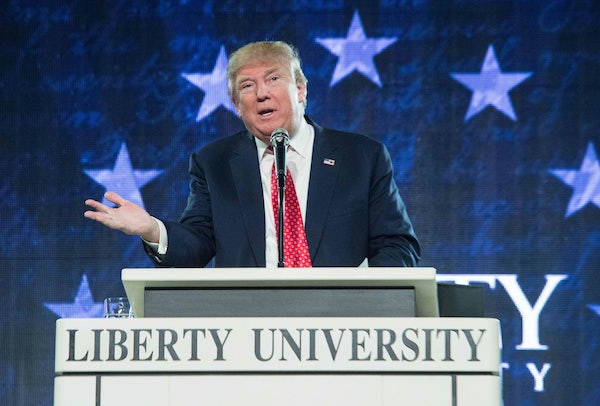 Donald Trump’s transformation as the religious liberty candidate is pretty much complete.

And Hobby Lobby CEO David Green is the dark sorcerer responsible. In an op-ed for USA Today, Green anointed Trump the savior the religious right’s been looking for—or at least a superior alternative to Hillary Clinton:

America’s foundation of religious liberty is already at risk. With Hillary Clinton as president, our foundation will surely crumble. For Americans who value freedom of religion, we must elect a president who will support a Supreme Court that upholds not only this freedom, but all that have emanated from it. That president is Donald Trump.

Green’s endorsement is not a small thing. His Supreme Court victory over the nefarious forces of secularism made him a hero to evangelical voters, and he’s used his sizable fortune to create a collective of evangelical scholars and a Bible museum set to open next fall in DC. In 2016, his support is arguably worth more than Jerry Falwell Jr.’s.

Trump has not historically been beloved by the nation’s value voters. He placed a mediocre fifth at last year’s Value Voters Summit and has had to fight harder for their approval than any other Republican presidential candidate in recent memory. But while he’s had to prove himself to evangelicals, the eventual outcome was never really in doubt. They’ve invested too much money and effort to earn and then maintain proximity to political power to risk losing it now. Once Trump emerged as the obvious frontrunner, their support was very much a given.

Evangelical handwringing never marked a serious departure from party politics. It was a cynical play for leverage, and Green’s endorsement is evidence it succeeded.