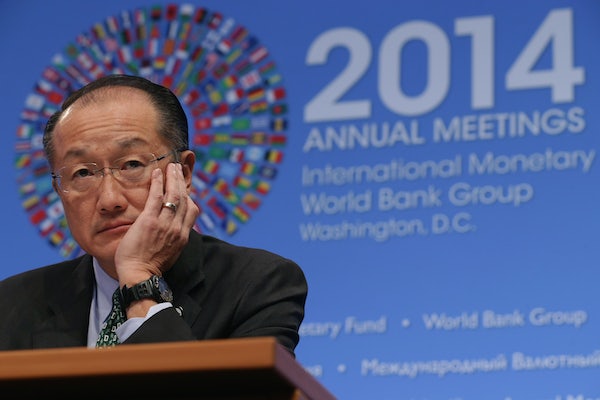 The specter of Donald Trump is haunting the World Bank.

Since the World Bank announced its timeline to select a new president two weeks there has been fierce backlash. Incumbent Jim Yong Kim’s term ends in June 2017. But the bank wants to decide his successor now, and quickly: The timeline outlined by the bank lasts less than a month, from August 25th to September 14th.

“It takes us six months to hire a junior economist. Why are we taking just a month to hire a president?” Daniel Sellen, chair of the bank’s staff association said to the Financial Times. The answer? Donald Trump.

The timeline would allow for a confirmation before the World Bank’s annual meeting in October and, coincidentally, the U.S. general election in November.

According to Hafed Al-Ghwell, a former staffer and adviser to the dean of the board of executive directors, “Jim Kim has been basically lobbying ... saying, ‘oh, you better choose [me] now before Trump might win and name somebody from his side.’ The entire process has been timed and planned … to finish before November,” based on conversations with current members on the board of directors.

The move is especially infuriating and disappointing to the bank’s international contingent and following, who witnessed the interference of the selection process by the 2012 U.S. domestic elections. Then, the Nigerian economist and former Managing Director of the bank Ngozi Okonjo-Iweala was thought to be a shoo-in for the position. But a last minute intervention from Tim Geithner saw Russia, China and other close allies change their vote to support Jim Yong Kim, the American candidate. Something similar seems to be happening now.