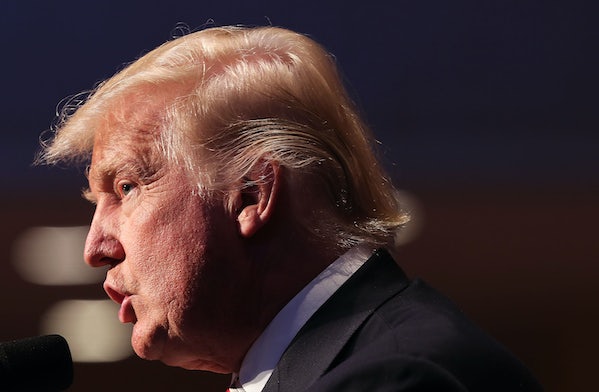 The 2016 election is a referendum on Donald Trump. That’s pretty much it.

Brian Beutler rightly identifies the problem with the media’s coverage of the presidential race as one of skewed proportions. Hillary Clinton’s controversies—her use of a private email server, the conflicts of interest stemming from her husband’s work at the Clinton Foundation, and the generally exasperating way the Clintons have addressed these issues—have been unfairly put on par with Trump’s far more egregious sins. All of this was on display at NBC’s presidential forum last night, wherein Clinton was grilled by Matt Lauer and members of an audience largely composed of military veterans, while Trump skated by despite lying about his position on the Iraq War, using confidential national security briefings to darkly suggest a grave dereliction of duty on the part of President Obama, praising Vladimir Putin, and affirming past statements that allowing women to serve in the military only encourages sexual assault. This is easily enough evidence that Trump isn’t fit to be president, and that, whatever Clinton’s flaws, his fitness is the only meaningful question that must be addressed in this election.

Trump’s performance last night, of course, only comes on top of even more disturbing aspects of his personal history and campaign, including a patent disregard for the Constitution, a willingness to give voice to the racist right, and a penchant for taking advantage of society’s most vulnerable members. This is not even to mention the world-historical embarrassment that a President Trump would confer on the United States. Clinton, at best, would extend the progress made under the Obama administration and serve as a pathbreaking role model for women in this country; at worst, the institution of American democracy would survive in some recognizable form. The same can’t be said of Trump. It’s important for the press to investigate Clinton vigorously and responsibly, especially if she is to be president. But Trump’s candidacy is so awful that, when it comes to a choice between the two, Clinton herself really doesn’t matter. The stakes of this election were determined when the Republican Party nominated Trump. He is what this election is about.