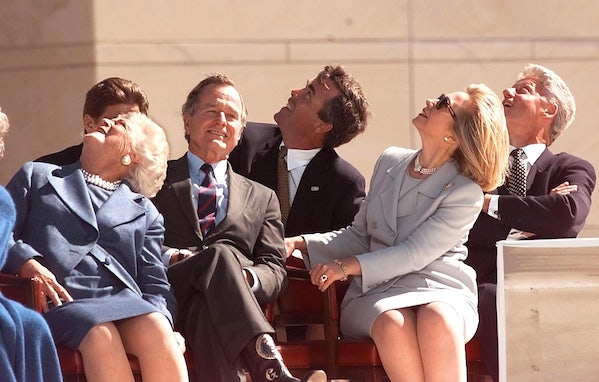 A Bush is voting for Clinton, according to a Kennedy.

There are at least three dynasties in play in this election: the Trumps, the Clintons, and, backstage but still a potent force, the Bushes. Now, a leading member of another dynasty, Kathleen Kennedy Townsend, daughter of the late Robert Kennedy, has disclosed on Facebook that George H.W. Bush is voting for Hillary Clinton. “The President told me he’s voting for Hillary!!” she wrote, underneath a photo of her shaking Bush’s hand. A Bush spokesperson refused to either confirm or deny Townsend’s claim.

Clinton has been assiduously making a pitch to disaffected Republicans ever since the Democratic convention. That the head of the foremost Republican family is now saying, however privately, that he’s voting for Clinton is a sign that Clinton’s strategy is paying off. Although not a formal endorsement, this stealth support for Clinton could be the start of the Bush clan becoming more upfront about breaking with their party over Trump.

But it’s by no means clear how many voters the Bushes can still sway. After all, if Republicans were still willing to listen to the Bushes, Jeb, not Donald Trump, would be the nominee.