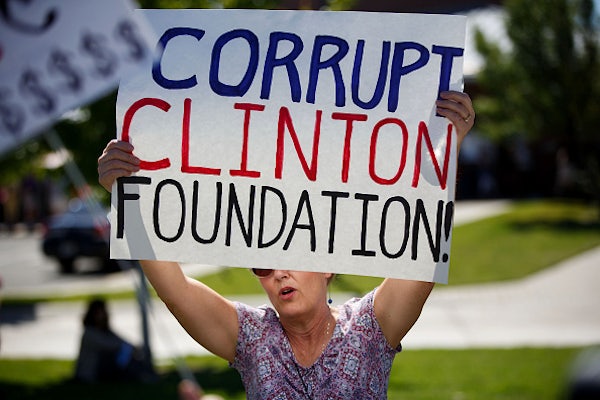 “Crooked Hillary” has nothing on the Trump Foundation.

Donald Trump has done his best to paint his opponent as a member of the slimy Washington elite, calling the Clinton Foundation the “most corrupt enterprise in political history.” Indeed, the Clinton Foundation has rightly attracted scrutiny for the way in which it intersects with the political lives of both Bill and Hillary Clinton, presenting clear conflicts of interest that have yet to be resolved in a satisfactory way. But those questions, to be clear, are not at all comparable to the corrupt miasma hovering over the Trump Foundation, which indubitably abused charitable contributions and should warrant criminal investigation.

On Tuesday, The Washington Post reported that Trump spent $258,000 in foundation money to settle lawsuits related to his for-profit businesses. In doing so, he may have violated laws prohibiting “self-dealing,” which bar nonprofit leaders from paying themselves or their business ventures with charity funds. In one of four alleged cases of fraudulent self-dealing, the town of Palm Beach, Florida, agreed to settle a dispute with Trump’s Mar-a-Lago club if it made a $100,000 donation to a veterans charity. But according to tax records, the club didn’t pay up: The Trump Foundation, to which Trump himself has not donated since 2009, footed the bill. (The dispute arose over a very Trumpian argument about an oversized flag at Mar-a-Lago that violated town codes. Trump claimed the huge flag was necessary, claiming that a smaller flag “would fail to appropriately express the magnitude of Donald J. Trump’s ... patriotism.”)

There is no ethical ambiguity here. Trump hustled charitable donations and used them for personal gain. No such blatant evidence exists in the case of the Clinton Foundation, and any media narrative that attempts to equate the two charities would be doing a disservice to all voters, including Trump’s supporters. If Trump’s bigotry were not enough to bring his morals into question, the malfeasance at his foundation should undermine his image as a scourge of corruption in America.