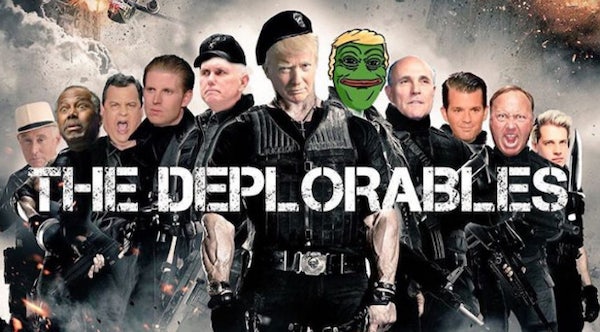 Hillary Clinton was right when she made the (bizarrely phrased) assertion that half of Donald Trump’s supporters could be put in a “basket of deplorables.” But nevertheless, while the immediate post-basket days were spent arguing if Clinton’s assessment was accurate (yep), most people agreed that the statement nevertheless was a “gaffe.” Generally speaking, it is not good politics to insult a significant portion of the electorate: Elections are run by attacking your opponent, not voters.

The Trump campaign could not have reacted more gleefully to Clinton’s comments, which came in the middle of a particularly rough stretch of the campaign for her. Over the last two weeks, “Deplorables” has become a Trump campaign meme: They wanted it to bury Clinton the way that Mitt Romney’s “47 percent” gaffe buried him at roughly the same period in the election cycle in 2012.

The problem with this strategy, however, is that, despite being weirdly-phrased and unorthodox politically, Clinton’s comments were still perceptive. She correctly labeled a significant portion of Trump’s base as being “racist, sexist, homophobic, xenophobic, Islamaphobic.” And she limited her critique—it was broad, but not overreaching. And that, as my colleague Brian Beutler argued shortly after the comments were made, it forced Trump’s campaign into a tight spot: Mike Pence, for instance, argued that no Trump supporters deserved to be called deplorable—even David Duke—because what else was he supposed to do? Anything else would acknowledge that Clinton was right, or partly right.

Clinton’s comments, however, have not negatively affected her campaign—in fact, the opposite may be true. An AP-GFK poll found that “sixty percent of registered voters say [Trump] does not respect ‘ordinary Americans,’” compared to 48 percent who say the same of Clinton. In other words, the “deplorables” comment has not negatively affected Clinton, though it could also be argued that the real takeaway here is that both candidates are tremendously unpopular. “Basket of deplorables” wasn’t Clinton’s “47 percent moment,” and the Trump campaign’s decision to signal boost the “gaffe” may have caused more damage to their side than to hers.