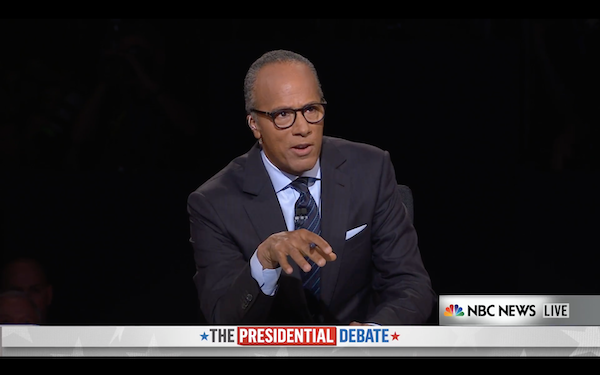 Holt seemed to be sitting on his hands for the first hour of the debate, watching the nominees spar about the economy, jobs, and trade deals without driving the conversation at all. But when he moved the conversation to policing and racial justice, the dynamic changed.

Trump mentioned stop-and-frisk as a key element in his plan to return “law and order” to the United States, noting that former New York Mayor Rudy Giuliani was sitting in the audience. “It worked very well in New York,” he said.

Holt pushed back, mentioning that District Court Judge Shira Scheindlin ruled that the practice was unconstitutional in 2013.

Through their exchange, Clinton was staring steelily at her opponent, only chiming in later to say: “Stop-and-frisk was found to be unconstitutional, in part because it was ineffective.” It’s a good strategy on her part, letting Holt point out Trump’s most flagrant falsehoods and only interceding later with specific statistics that show Trump was wrong.