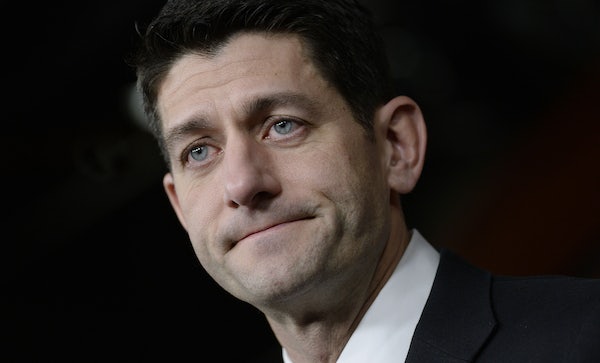 Paul Ryan is screwed no matter what happens in November.

For the last several months, he has tried to live in a parallel reality to Donald Trump. Whenever Trump says something controversial, Ryan claims total ignorance. When asked on Tuesday if he was aware that Trump had told Fox & Friends the morning after the debate that Alicia Machado gained too much weight after winning Miss Universe, Ryan said he had been “working out” at the time. It is as if Ryan prefers to pretend that Trump doesn’t exist. But as Politico notes this morning, he won’t be able to do that if Trump wins the election:

If Trump wins and Ryan retains the speakership, the Wisconsin Republican will be forced to continue to wedge his positions into Trump’s alternate Republican universe.

If Clinton wins, Ryan will have to preside over a slimmed Republican majority, more heavily populated with burn-the-house-down conservatives. He’ll have to cut deals and do business with Hillary Clinton—a woman he’s met with privately just twice—while at the same time keeping conservatives content.

If you looked at Trump and Ryan from a distance, you would not guess that they belong to the same party. They disagree about free trade and defense, for instance, and their philosophical and temperamental differences are profound. They do have one (horrible) thing in common, however: They are both fans of the novels of Ayn Rand. Ryan and House Republicans will certainly try to treat Trump as a rubber stamp to pass draconian entitlement cuts, but Trump, who has shown signs of being a Perot-esque egomaniacal micromanager, may not like that.

But a Clinton victory would push Ryan in an even more difficult place. Compromise has undone many Republicans before, and the party should be bracing for a rash of alt-right candidates in 2018, should Clinton win.