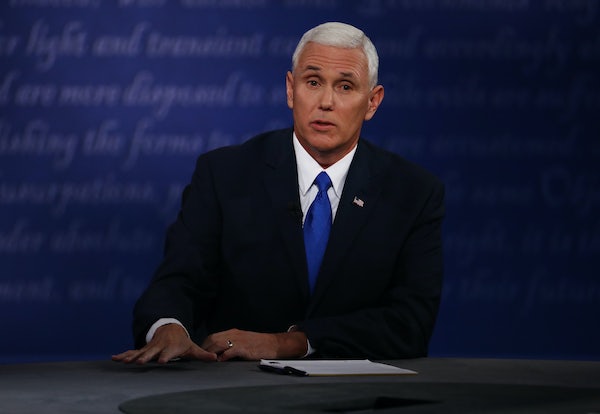 Mike Pence is so desperate to be Reagan-esque he’s reusing his old zingers.

It’s one of the most iconic lines in presidential debate history: “Well, there you go again,” then presidential candidate Ronald Reagan said in 1980, a light touch in a sticky debate against Jimmy Carter that helped dispel concerns that Reagan was too far to the right.

Reagan was a master of political theater, and his expertly timed zingers on the debate stage are the gold standard in debate strategy.

But tonight, in the vice presidential debate at Longwood University, Pence recycled that same line from 1980. As CBS’s Elaine Quijano turned the discussion to Social Security and Tim Kaine promised to work to keep the program solvent, a smooth Pence repeated it for the audience in Farmville. “There they go again,” he said.

Pence tried to link himself and Donald Trump to Reagan all night. Earlier, he told the audience that their tax plan would get the American economy moving again, just as Ronald Reagan’s did in the 1980s. But whether the line was a premeditated attempt to frame himself as a silver-haired reincarnation of the 40th president or plain old unoriginality, it still fell flat, prompting only very tepid laughter from the crowd.