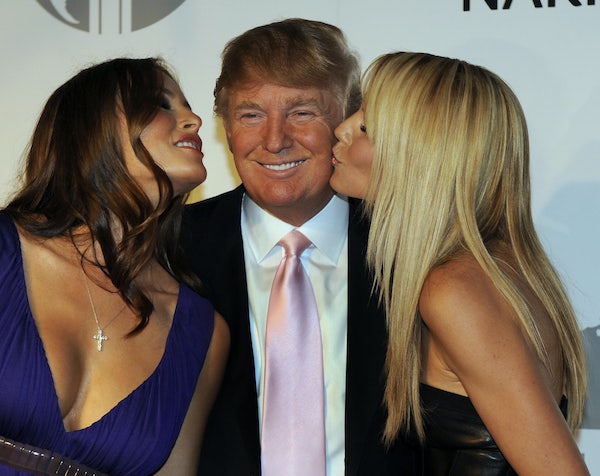 Donald Trump’s way of hitting on women is to “grab them by the p**sy.”

With two days until the second presidential debate, Trump doesn’t exactly have the wind at his back. First, his lame town hall was widely mocked. Then, he said that the Central Park Five were still guilty. Then, U.S. intelligence officials blamed Russia for the hack of the DNC, an event that Trump has sought to downplay when not actively imploring Russia to hack Hillary Clinton’s emails. And then The Washington Post’s resident Trump Scoopsmaster David Farenthold published a recording of Trump discussing sexually harassing women and attempting to seduce a married woman in 2005. Here’s a chunk of the transcript:

“I did try and fuck her. She was married. ... And I moved on her very heavily. In fact, I took her out furniture shopping. She wanted to get some furniture. I said, ‘I’ll show you where they have some nice furniture.’ I moved on her like a bitch, but I couldn’t get there. And she was married. Then all of a sudden I see her, she’s now got the big phony tits and everything. She’s totally changed her look....

Trump had married Melania a few months before making these statements to Billy Bush, who is now a contributor to The Today Show.

But the most incredible thing about this story may just be Trump’s response. “This was locker room banter, a private conversation that took place many years ago. Bill Clinton has said far worse to me on the golf course—not even close,” Trump told the Post in a statement. “I apologize if anyone was offended.”

There’s a lot going on here! First of all, Trump apologizing is always notable, even though this is pretty weak sauce. But Trump is also claiming that he and Clinton had an apparently filthy conversation on the golf course. If you’re gonna make an accusation like that, you better show the receipt. Trump’s only defense for his own misogyny has been to point at Clinton’s history of misdeeds. It’s never worked particularly well, but it’s really starting to wear thin now.