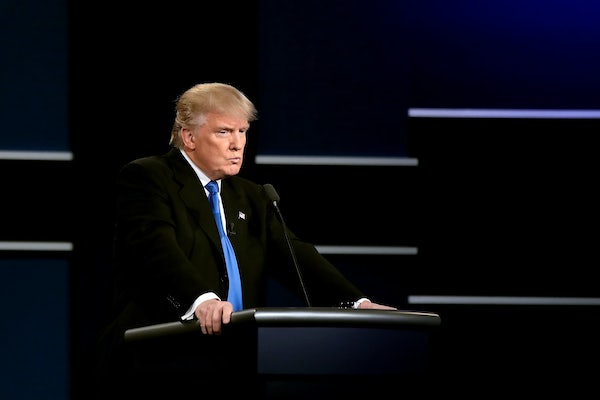 It turns out that when Trump told Anderson Cooper at the second presidential debate that he had never acted on his “locker room talk,” several women watching at home pointed at the screen and said, “Liar.” They included, according to The New York Times, Jessica Leeds and Rachel Crooks, who say Trump groped and kissed them, respectively, without their consent. Also Mindy McGillivray, who told The Palm Beach Post that Trump groped her at his Mar-a-Lago resort in Florida some 13 years ago.

Meanwhile, Yahoo reports that Cassandra Searles, who competed in the 2013 Miss USA pageant, said on Facebook that Trump “continually grabbed my ass.” CBS has uncovered footage from 1992 of Trump surveying a group of 10-year-olds participating in a Christmas television feature and declaring of one of them, “I am going to be dating her in 10 years. Can you believe it?”

Trump, in response, is promising to unveil new accusations of sexual assault involving Bill Clinton. “We’re going to turn him into Bill Cosby,” Steve Bannon, the head of Trump’s campaign, told Bloomberg Businessweek. Trump also denied the accusations contained in the Times story, telling one of the reporters, “You are a disgusting human being.” This campaign has been pretty ugly so far, but it looks like it’s only going to get uglier.