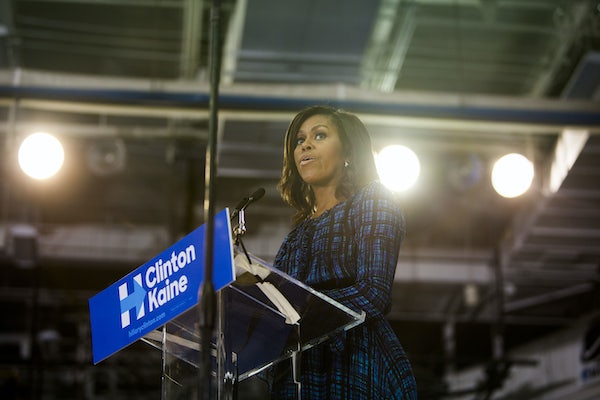 At a rally on Thursday afternoon in Manchester, New Hampshire, the first lady candidly addressed the implications of Trump’s attitudes about women and sexual assault.

“I can’t believe that I am saying that a candidate for president of the United States has bragged about sexually assaulting women,” she said. “And I have to tell you that I can’t stop thinking about this. It has shaken me to my core in a way that I couldn’t have predicted.”

During her powerful speech, Obama rebuked Trump’s language in the infamous “grab ‘em by the pussy” tape unearthed by The Washington Post last Friday. She called his comments abnormal, disgraceful, and intolerable.

“This is not something that we can ignore, it is not something we can sweep under the rug as just another disturbing footnote in a sad election season,” she said. “Because this was not a lewd conversation, this was not just locker room banter. This was a powerful individual, speaking freely and openly about sexually predatory behavior.”

The way the Trump campaign tried to spin the controversy was telling. It played the comments off as just another example of Trump’s antics—“locker room talk,” “just words”—and ignored the actual subjects of Trump’s conversation: women. Obama’s speech is a much needed wake-up call, not just about this election, but how women are treated in this country.

Throughout her remarks, Obama called for us to remember and exercise basic human decency. “The belief that you can do anything you want to a woman. It is cruel. It is frightening and the truth is it hurts,” she said.