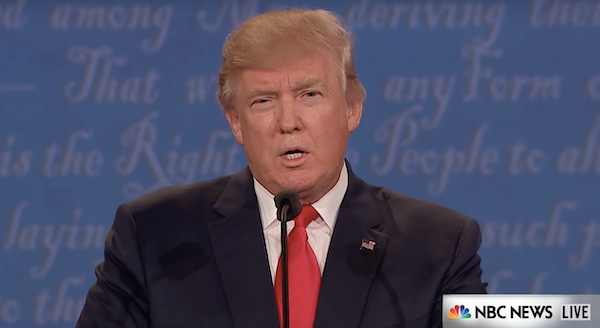 In the first two debates, Trump’s performance was largely characterized by menace. In the first, he was mad—very mad—and lost his temper repeatedly. In the second, he stalked Clinton around the stage. But at the start of the third debate, Trump has ... spoken very slowly. He’s been, to use his favorite Jeb Bush insult, low energy.

Why? Trump sometimes starts slow—it takes him time to get worked up. By the time he was asked about abortion (during which he claimed that babies a day away from being born would be ripped from the womb and murdered under a Clinton administration) and immigration, he had started to perk up a bit. But Trump’s slow start suggests he had been advised to speak slowly and (relatively) softly, in order to seem less unhinged and more presidential.

The other thing hurting Trump is the fact that he badly needs glasses, which means that he squints constantly. Wear your glasses, Donald.