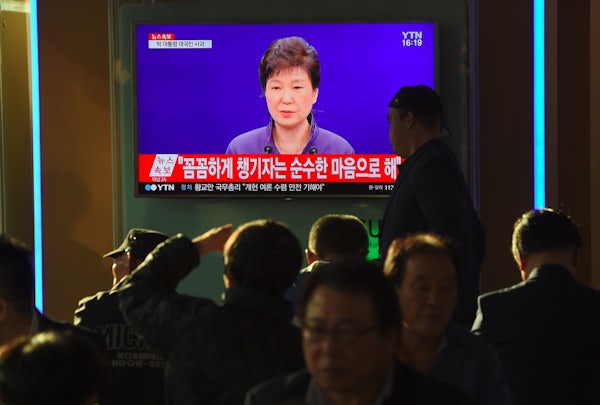 For a truly devastating email controversy, go to South Korea.

In the wake of Monday revelations that a trashed hard drive belonging to a longtime confidant of President Park Geun-hye contained 200 classified government documents, the president gave a rare public apology on Tuesday. But her claim that her exchanges with her friend had been conducted “with a pure heart” quickly became the target of national scorn, and many have called for her impeachment instead. While some see parallels to Clinton’s email server controversy, the level of corruption and mismanagement of national information attributed to Park are far more serious and bizarre.

The scandal is multi-fold. First, there’s the evidence that Park had intentionally entrusted state information to Choi Soon-sil, a mysterious figure who is neither a state official nor affiliated with any organization. Her only claim to the president is as the daughter of a cult-like figure who has been by Park’s side for most of her life and who claimed to channel Park’s dead mother. Prosecutors are also investigating whether the president’s influence helped Choi to receive expedited approval of two foundations that racked up multi-million dollar donations from South Korea’s conglomerates in the space of a couple days, which she then used as her own personal slush fund to purchase property and fund her personal expenses. The scandal even extended to prestigious Ewha Womans University, in which the school is alleged to have bent admissions policies and other regulations to allow Choi’s daughter to matriculate. The university president has already stepped down.

The most lasting damage, however, may be to Park’s public image as a modern political leader. The hard drive revealed that the president had sent drafts of her speeches and remarks to Choi before they were delivered, and Park admitted on Tuesday that she had consulted Choi for her opinions on these statements after her inauguration (a privilege not even extended to her own presidential staff). As a result, many now view the president as a blind follower of a fringe religious figure. As a representative of the main opposition party stated, “South Korea’s Constitution stipulates the country has only one president. But it turned out two presidents led the nation.” Even her own political party has asked her to leave the party.

As her approval numbers plummet, Park’s controversial proposal to amend the Constitution and extend presidential term limits, which some saw as a ploy to detract from the corruption probe, may be going nowhere fast.