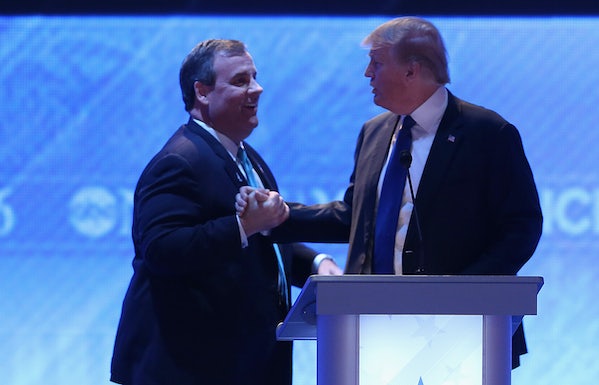 Thank the good people of New Jersey for reminding us that Donald Trump’s campaign is full of crooks.

The Bridgegate verdict was handed down on Friday and, to no one’s surprise, the jury found two former Chris Christie aides guilty of scheming to close lanes on the George Washington Bridge to punish one of Christie’s political rivals. The charges faced by Michael Baroni, a top official at the Port Authority appointed by Christie, and Bridget Anne Kelly, Christie’s former deputy chief of staff, carry a maximum 20-year sentence, though the case’s prosecutor said that he will not recommend that they serve that long.

Christie has denied all knowledge of the plan to close the lanes, but over the course of the trial he was repeatedly implicated in the scheme, particularly by David Wildstein, a Port Authority official who pleaded guilty and was the prosecution’s most important witness. Christie has one year left in his term as governor of New Jersey, and it seems highly likely that the spotlight will now move to him.

The conviction of Baroni and Kelly is also a reminder that Donald Trump has surrounded himself with people who could charitably be described as having problems with integrity. Christie was very nearly Trump’s vice presidential nominee—it took ousted campaign manager Paul Manafort lying about mechanical problems in Trump’s airplane to stop him from being nominated. But Christie’s connection to Bridgegate does not seem to bother Trump. Christie is not only leading his transition team, but will be campaigning with Trump this weekend in the key states of New Hampshire and Pennsylvania.

New Jersey takes a lot of (undeserved, it’s a great state, fight me) crap, but it just did the country a solid by reminding everyone, in the eleventh hour, that Trump’s campaign is full of people like Christie.