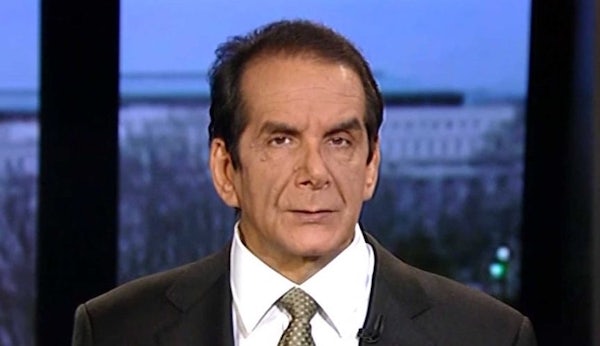 How terrible is Donald Trump? So bad that even former New Republic staff writer turned Fox News crank Charles Krauthammer finds himself casting his lot with Clinton. Krauthammer was a liberal when he was younger, even working as a speech writer for Walter Mondale, but over the last three decades he’s been one of the most rigid and implacable of neoconservatives. That might explain why his endorsement is so saturated with disdain that it reads like a condemnation.

Krauthammer takes up much of his column space revisiting the conservative case against Clinton, using the investigation opened up by FBI Director James Comey as a starting point:

Comey’s announcement brought flooding back — to memory and to the front pages — every unsavory element of the Clinton character: shiftiness, paranoia, cynicism and disdain for playing by the rules. It got worse when FBI employees began leaking stories about possible political pressure from the Justice Department and about parallel investigations into the Clinton Foundation.

At the same time, Clinton was absorbing a daily dose of WikiLeaks, offering an extremely unappealing tableau of mendacity, deception and the intermingling of public service with private self-enrichment.

Krauthammer even entertains the crack-pot theory that Russian leader Vladimir Putin might try to blackmail Clinton: “And regarding WikiLeaks, how do we know it will have released the most damning material by Election Day? A hardened KGB operative like Vladimir Putin might well prefer to hold back whatever is most incriminating until a Clinton presidency. He is surely not above attempted blackmail at an opportune time.”

Krauthammer’s column proves how useless conservative endorsements of Clinton are as a genre. In order to hold on their right-wing credentials, conservative pundits will lard any endorsement with so much bile as to make it worthless.