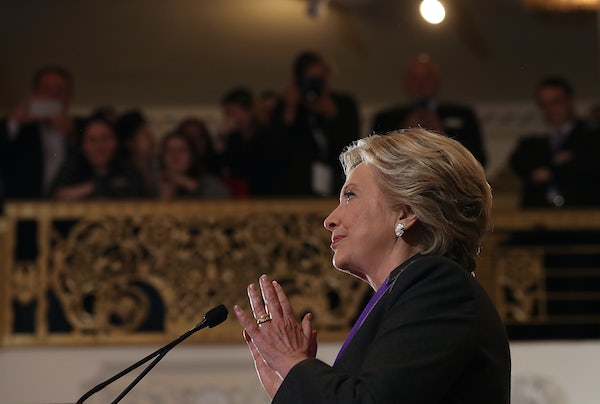 Hillary Clinton and Barack Obama both argued that the system is working. (It’s not working.)

This election was a long nervous breakdown. If you doubted the country was in the midst of an existential crisis before, surely you cannot doubt it now.

But in two speeches today, Clinton and Obama spoke up for the American system, and essentially argued that it is working, even if it is not working out particularly well for them. In a gracious concession speech that oscillated between being genuinely moving and boring, Clinton thanked her supporters and wished Donald Trump well, saying she hoped that he “will be a successful president for all Americans. ... We owe him an open mind and a chance to lead.”

Obama, meanwhile, emphasized that this is simply how our messy system works, adding that “we are all on the same team.” He also compared a presidential election in which one candidate promised to ban Muslims from entering the country and to lock his opponent up to a “intramural scrimmage.” “Sometimes you lose an argument, sometimes you lose an election,” he said. “But the path this country has taken has never been a straight line. We zig and zag.”

That is certainly one way of putting it. It should be said that this is what Obama and Clinton are supposed to do, and that they both condemned Trump for hinting he would refuse to facilitate the peaceful transition of power. But both speeches also had the result of normalizing an election result of which there is nothing normal: The political system that they advocated for failed, and millions will suffer for its failure.