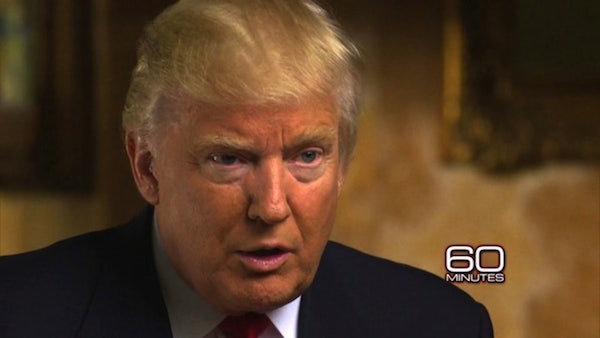 60 Minutes’ Donald Trump interview is how authoritarians are normalized.

The president-elect is getting a fair amount of good press after his appearance on CBS Sunday night. He told his supporters to “stop it” with the racial slurs, harassment, and violence some are committing following his victory in Tuesday’s election. He said he’s “fine” with same-sex marriage. He even pledged not to take a salary or “big” vacations in the White House, and sought to reassure Americans about his temperament.

No one should be reassured.

While Trump did admonish his supporters, he also belittled and tried to delegitimize demonstrations in cities across the country. He dismissed some protesters as “professional,” and said he’d seen only “one or two instances” of violence. (The Southern Poverty Law Center reports over 200 incidents of harassment and intimidation.)

Worse, Trump confirmed plans to move quickly on his signature campaign pledges. He’s still planning to build a wall on the Mexican border, though he allows that some of it could be fencing instead. He’s still going to deport or jail undocumented immigrants that “are criminal and have criminal records, gang members, drug dealers,” saying “we have a lot of these people, probably two million, it could be even three million.”

The president-elect all but confirmed he’ll nominate Supreme Court justices who’d overturn Roe v. Wade, reiterating that his judges will be pro-life. When 60 Minutes correspondent Lesley Stahl pointed out that some women would lose access to abortion with Roe overturned, Trump replied, “Well, they’ll perhaps have to go, they’ll have to go to another state.”

It’s also worth noting that, whatever the president-elect says about marriage equality, it’s likely that the same type of conservative judge who’d overturn Roe might overturn that ruling. Stahl failed to follow up on that. In fact, as Media Matters wrote, her entire approach was a failure:

60 Minutes gave a master class in normalizing a dangerous demagogue—inviting President-elect Donald Trump to reintroduce himself as a reasonable politician while glossing over the most dangerous features and promises of his recent campaign, including his reliance on the chief of the white nationalist “alt-right” website Breitbart News, Stephen Bannon, who has just been named White House senior counselor.

It’s further evidence that the press is blowing its coverage of this transition, somehow not learning the lessons of its failure during the campaign.