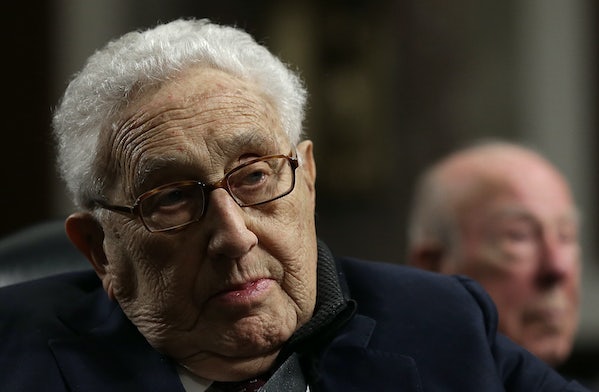 Kissinger stayed largely silent during the election, emerging only to release a joint statement with fellow Republican foreign policy veteran George Shultz that he would not be endorsing a presidential candidate. That statement was a relief for many on the left who feared that Hillary Clinton was courting Kissinger, a longtime friend, in an attempt to woo disaffected Republicans. But if there was a silver lining to the otherwise interminable and horrifying election, it was that Kissinger seemed like a man without a country—too damaging for Clinton and too establishment for Trump, who ran in part by arguing that America’s military was overstretched and that its intervention-heavy foreign policy was foolish. (In keeping with his campaign strategy of throwing as much shit at the wall as possible, Trump also repeatedly contradicted these points by arguing for military intervention in Iraq and Syria.)

Well, that was good while it lasted! Kissinger is apparently meeting with Trump today, where they will probably discuss which countries to bomb and how much to bomb them and/or the underrated qualities of gold leaf. That Kissinger and Trump would meet is not so surprising. For one thing, they have an existing relationship, having apparently huddled in the spring and spoke several times over the phone during the primaries. But it’s even less surprising given the path that Trump’s transition has taken: Having won the election by decrying a corrupt plutocratic establishment, Trump has welcomed its most odious members to his administration.