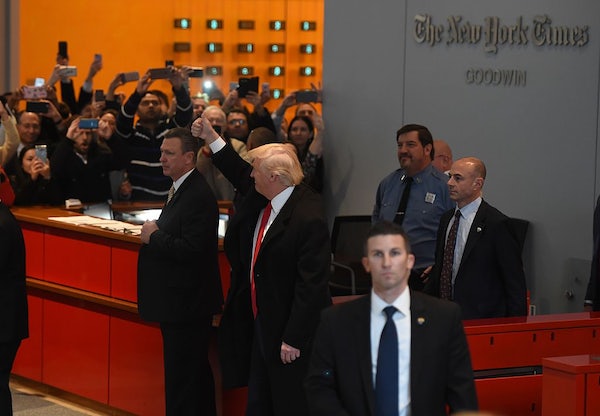 Donald Trump knows he can tell The New York Times whatever he wants.

Trump’s much-publicized meeting with the Times earlier today—with its will-they-won’t-they drama and density of batshit moments—was fitting insofar as it was both completely unprecedented and not surprising in the slightest.

Much of the coverage of Trump’s Times interview has focused on the many moments in which Trump seemed to back away from campaign promises or to distance himself from the racist portions of his base. Over the course of the interview, Trump said he “thinks there is some connectivity” between human activity and climate change; that he “disavowed” and did not want to be associated with the “alt-right”; that Steve Bannon was not a member of the “alt-right”; that he was disappointed that he did not win the popular vote; that prosecuting Hillary Clinton would be “very, very divisive” but that, contrary to his campaign manger’s comments on Tuesday morning, he was still open to it. In less surprising news, he also expressed confidence that he was not breaking the law by running his businesses and his presidential transition at the same time.

These moments have gotten quite a bit of attention, given that Trump indicated that he might be abandoning many of the key issues of his campaign, like the wall. They’ve also gotten attention because they fit into a larger narrative, that Trump is a fraud, a rich man who hoodwinked his lower-class followers and will now begin to sell them out. There may be a grain of truth in that narrative, but one of the reasons why Trump is so flexible is that he knows he has these voters’ unconditional support—and that it will take more than doublespeak to break that bond. (Ironically, liberals pointing out the hypocrisy has only seemed to strengthen it.)

Of course, it also helps that Trump knows that his followers don’t read the Times.