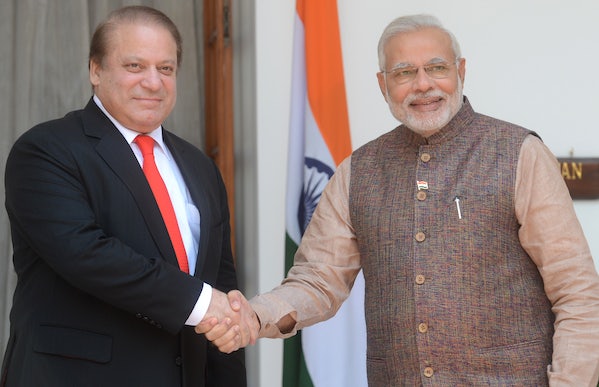 With one phone call, Donald Trump might have upturned America’s relationship with both Pakistan and India.

Going against State Department protocol, the president-elect continues to speak to foreign leaders on a personal line and without preparation. Trump is also not releasing read-outs of these calls, so what we know of them tends to come from foreign sources. The office of Pakistani Prime Minister Nawaz Sharif has released a transcript of his conversation with Trump that is both amusing and alarming. The transcript reads:

Prime Minister Muhammad Nawaz Sharif called President-elect USA Donald Trump and felicitated him on his victory. President Trump said Prime Minister Nawaz Sharif you have a very good reputation. You are a terrific guy. You are doing amazing work which is visible in every way. I am looking forward to see you soon. As I am talking to you Prime Minister, I feel I am talking to a person I have known for long. Your country is amazing with tremendous opportunities. Pakistanis are one of the most intelligent people. I am ready and willing to play any role that you want me to play to address and find solutions to the outstanding problems. It will be an honor and I will personally do it. Feel free to call me any time even before 20th January that is before I assume my office.

On being invited to visit Pakistan by the Prime Minister, Mr. Trump said that he would love to come to a fantastic country, fantastic place of fantastic people. Please convey to the Pakistani people that they are amazing and all Pakistanis I have known are exceptional people, said Mr. Donald Trump.

If you set aside the typical Trumpian hyperbole (“amazing work,” “fantastic people”), there is the fact that Trump seems to have agreed to a visit to Pakistan. This is already attracting attention in both India and Pakistan, longtime rivals being cultivated by the U.S. in different ways.

In a normal government, the decision to visit such a fraught area would be weighed very carefully behind closed doors. With luck, the government of Pakistan won’t interpret Trump’s comments either literally or seriously, but see it as typical salesman blather.