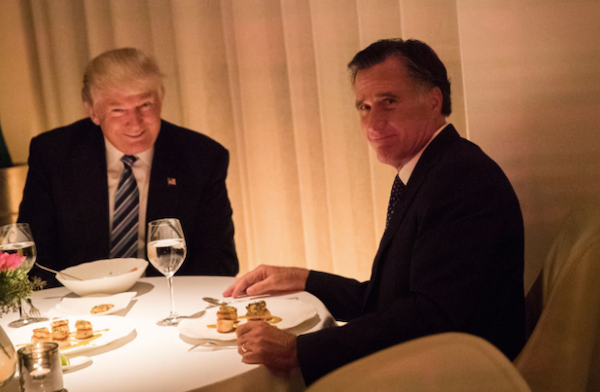 Trump has been gracious to Romney in public since becoming president-elect—he told Fox News Sunday’s Chris Wallace, “I’ve really gotten to know him, and I get along with him really well.” But the simplest explanation for Trump dangling the job of secretary of state in front of Romney was that he was trying to humiliate the 2012 Republican nominee for his unsparing criticism of Trump, and for his support of third-party candidate Evan McMullin. On Sunday—after it was reported that ExxonMobil CEO Rex Tillerson is expected to be Trump’s pick—Trump confidante/Roy Cohn fan club president Roger Stone crowed that Trump purposefully “tortured” Romney over the course of several weeks:

“Donald Trump was interviewing Mitt Romney for Secretary of State in order to torture him,” Stone said. “To toy with him. And given the history, that’s completely understandable. Mitt Romney crossed a line. He didn’t just oppose Trump, which is his democratic right, he called him a phony and a fraud. And a con man. And that’s not the kind of man you want as Secretary of State.”

It was payback, in other words. Trump never had any intention of giving the job to Romney, and in the process undercut any future criticism delivered by Romney. If Romney were to call Trump a “con man” again, the response from the Trump White House and his loyalists in the right-wing media would be: “If you think so poorly of Trump, why did you beg for a job in his cabinet?”

This is just the latest instance of Trump’s well-documented cruel streak. But, blinded by his own ambition, Romney shares some of the blame for getting played.