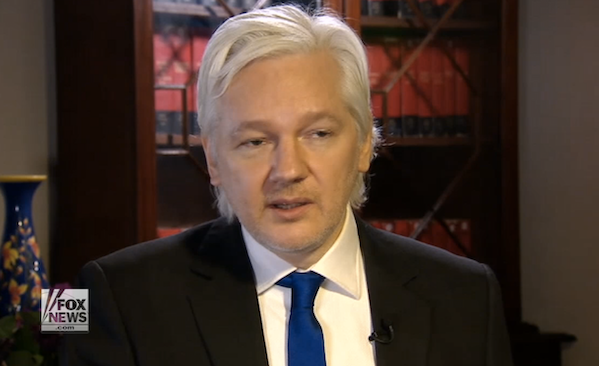 Julian Assange and Sean Hannity are giving Donald Trump the cover he needs on Russia.

Trump has been under increasing pressure from Democrats—and some hawkish Republicans, particularly John McCain and Lindsay Graham—to acknowledge that Russia hacked the DNC in an attempt to influence the U.S. elections.

Trump’s rebuttal is that his own judgment matters more than that of so-called “experts.” (Also, computers are complicated, man.) He seems especially sensitive to the hacks because they add weight to the argument that his presidency is illegitimate—not only did he lose the popular vote, but a foreign power may have pushed him into the White House.

Enter Sean Hannity and Julian Assange. In a rare interview with Hannity, Assange reiterated that his source for the Podesta emails was not Russian.

JULIAN ASSANGE: Yes. We can say, we have said, repeatedly that over the last two months that our source is not the Russian government and it is not a state party.

Later in the interview, Assange argues that the sole purpose of the alleged Siberian connection is to delegitimize Trump—that Trump’s enemies have cooked up this story to undermine his presidency.

There are also plenty of reasons to doubt Assange here. One is simply that the hacks may not have been conducted by his “source.” But it’s a story that perfectly fits Trump’s paranoid worldview. He won’t be bothered with the veracity of Assange’s statement because he apparently isn’t concerned with the truth when it comes to Russian hacking. Instead, he’ll use the interview to protect himself from the charge that he’s too soft on Russia. In fact, he may have already started.