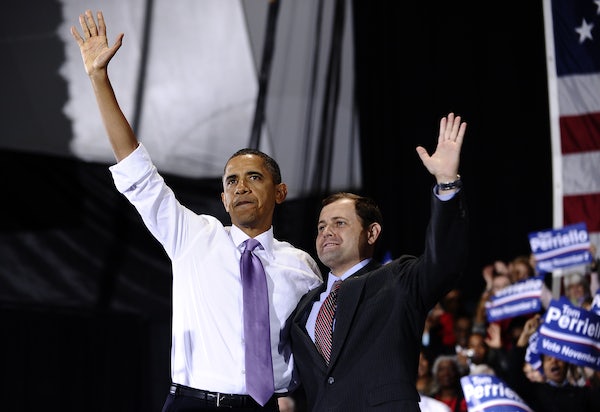 The Virginia governor’s race is the next front in the Democratic Party’s internal war.

Just a few days ago, Virginia’s Democratic Party thought it knew who its nominee for governor would be. Though not particularly well-known outside of Virginia (or inside of it, for that matter), the party establishment had cleared the field for Lt. Governor Ralph Northam, who had endorsements from outgoing Governor Terry McAuliffe, former Governor and current Senator Mark Warner, and harmonica-loving dad Tim Kaine in his pocket. A centrist who has made attempts to woo progressives, he also had raised millions of dollars—crucial to win in Virginia, which comprises multiple media markets, including the very expensive northern Virginia market.

But on Wednesday evening, it was reported that Tom Perriello, who served one memorable term in the House and is beloved by many Democrats and progressives across the country, announced that he would be entering the race. He made it official on Thursday morning, when he sent out an email informing recipients, “I’m running for Governor of Virginia because our state must be a firewall against hate, corruption, and an assault on the Virginia values of decency and progress. That is a wall worth building!”

The race for the nomination may end up looking quite a bit like the 2016 primary, where a candidate who was given every opportunity by the party’s establishment is forced to grapple with a plucky, populist upstart with a strong grassroots organization and a command of the economic issues facing voters. (Perriello’s team, no doubt, would probably rather point to the 2008 primary as an analogy.) Perriello’s message when he ran and won in 2008—defeating the bigoted conservative Virgil Goode—was, in many ways, ahead of its time. Perriello ended up winning a district that was heavily Republican by four points by emphasizing economic issues. Perriello, a former human rights lawyer, is also a particularly strong advocate against hate and discrimination—something that should come in handy in moments when the Virginia governor’s race becomes a referendum on national politics, as it sometimes does. Perriello lost in 2010 after being targeted by big money donors, particularly the Kochs.

Perriello will certainly face opposition, particularly on his record on abortion (he’s a Catholic who supported the Stupak amendment while in Congress) and guns (he was once endorsed by the NRA). But Perriello was also representing a particularly conservative district at the time, suggesting he will likely gravitate towards the left on these issues while running for a statewide office. Watching Barack Obama over the next few months will also be interesting—he has praised Perriello effusively as a “committed populist progressive,” but will likely sit out the race in deference to Kaine and the Democratic establishment. Whoever wins will likely face former RNC Chairman Ed Gillespie, who will certainly be the underdog. In any case, because of its national significance and its relevance to ongoing debates about the party’s future, the Virginia race is certain to get quite a bit of national attention. The ads will probably be pretty good too.