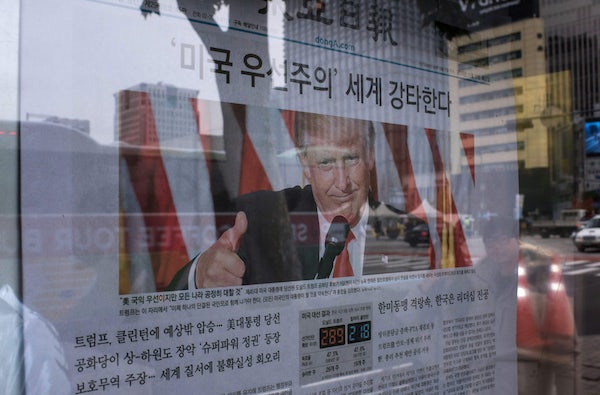 Governments all over the world are trying to figure out what Donald Trump’s presidency will mean for their own nation. South Korea has a novel solution. The Ministry of Foreign Affairs has tasked an officer with the job of monitoring Trump’s Twitter feed, with an eye to any signs of policy that might affect the country. Even during the transition, this is a necessary job because Trump is using Twitter to outline his agenda. On Monday, he tweeted:

In the past, statements by Washington on key policies would involve the Korean Embassy in Washington writing a report to send back to Seoul.

These days, Seoul was able to learn of Trump’s take on North Korea immediately and directly via Twitter.

Analysts tentatively suggest that Trump’s tweets suggest that North Korea will be a key national security issue for his administration - along with Beijing’s role in reining Pyongyang in.

Korean Foreign Minister Yun Byung-se himself does not use Twitter, but any key policy issues tweeted by Trump are reported to him right away.

In America, politicians like House Speaker Paul Ryan are trying to downplay the significance of Trump’s tweets, as if they were just an eccentric hobby. But the words of a U.S. president will always carry weight, so we had better be prepared for a world where Trump’s erratic tweeting drives global foreign relations.