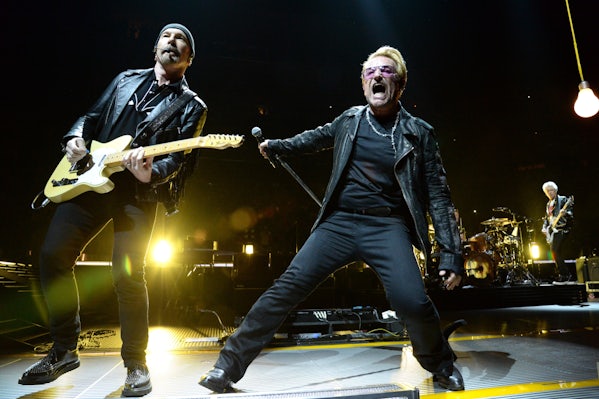 The president-elect is surrounded by bigots, bomb-throwers, and plutocrats. He will most likely profit handsomely from his presidency without even lifting a finger. He has expressed enthusiasm for torturing detainees, committing war crimes, and profiling people based on their race or religion. His attorney general will almost certainly roll back civil rights for nonwhite Americans. Income inequality will continue to rapidly rise. Nothing will be done about climate change.  The post-World War II order will continue to fray. War with Iran is very much on the table. Nuclear catastrophe is more of an actual possibility than it has been in decades. Things fall apart; the center cannot hold.

But it’s not all bad—or it’s not at least it’s not as bad as it could be. U2 had nearly finished a record in early November and was set to loose it on the world when Donald Trump was elected. But that changed everything. “We just went, ‘Hold on a second—we’ve got to give ourselves a moment to think about this record and about how it relates to what’s going on in the world,’” U2 guitarist and beanie enthusiast the Edge told Rolling Stone. “That’s because it was written mostly, I mean, 80 percent of it was started before 2016, but most of it was written in the early part of 2016, and now, as I think you’d agree, the world is a different place.”

The Edge did say that U2 may write songs about Trump, which is surely worse than whatever they had planned for a Clinton presidency: “We may even write a couple of new songs because that’s the very position we’re in. We’ve given ourselves a little bit of breathing space for creativity.” Still, in these trying times, we need to take small victories where we can get them and Donald Trump delaying the release of an album from “the last of the rock stars when hip hop drove the big car shows in the time when new media was the big idea” shows that there is still light in this dark, dark world.