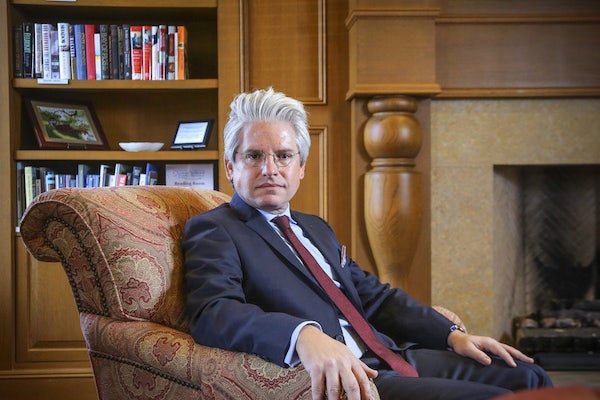 David Brock has written a creepy letter to Bernie Sanders.

Since her loss to Donald Trump, Hillary Clinton has kept a low profile. The running joke is that she has been wandering around the woods of Westchester, hanging with her dogs and engaging in reflection. The same cannot be said for Brock, Clinton’s ally and fundraising vanguard. After Clinton’s surprise loss, you would think that Brock, whose entire career has revolved around either working to destroy or elect the Clintons, would take this time to reevaluate his life choices. Instead, it’s been full-steam ahead.

Since November 8, Brock has announced that his super PAC American Bridge is launching a war room dedicated to holding Trump accountable, with “a rapid response team that will fact-check Trump’s claims in real time.” In an interview with Vanity Fair, Brock went into detail about his plans to turn his social media platform, Shareblue, into a “Breitbart of the left.” Today, Brock published a letter to Bernie Sanders, imploring for a unified front against Trump. He states, “I will do all I can to fight the Trump Administration, but I need help from those in the position to resist through our democratic institutions.” Brock asks Sanders to assist in American Bridge’s fight to “expose conflicts of interest in the administration.”

It is clear that Brock is working hard to position himself as a leader of the left in a post-Clinton order. Whether it’s because of the “American values” he claims to share with Sanders or the need to shore up his constellation of formerly pro-Clinton organizations is another question.