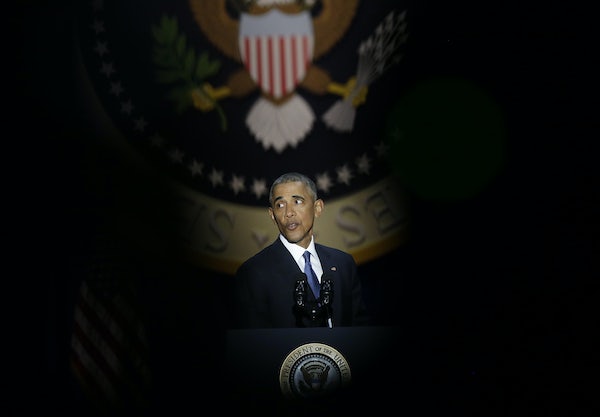 Although delivered with brio, especially in its last 15 minutes, the president’s farewell speech mainly covered familiar ground, recycling lines from earlier speeches (like the shoutout to “Selma and Stonewall” and the closing refrain, “Yes we can”). But one section stood out: when he warned of the “lure of fascism” and threats against democracy.

Here is the most disquieting section of the speech, one that must be read with Trump in mind:

It’s that spirit – a faith in reason, and enterprise, and the primacy of right over might, that allowed us to resist the lure of fascism and tyranny during the Great Depression, and build a post-World War II order with other democracies, an order based not just on military power or national affiliations but on principles – the rule of law, human rights, freedoms of religion, speech, assembly, and an independent press.

That order is now being challenged – first by violent fanatics who claim to speak for Islam; more recently by autocrats in foreign capitals who see free markets, open democracies, and civil society itself as a threat to their power. The peril each poses to our democracy is more far-reaching than a car bomb or a missile. It represents the fear of change; the fear of people who look or speak or pray differently; a contempt for the rule of law that holds leaders accountable; an intolerance of dissent and free thought; a belief that the sword or the gun or the bomb or propaganda machine is the ultimate arbiter of what’s true and what’s right.... Democracy can buckle when we give in to fear. So just as we, as citizens, must remain vigilant against external aggression, we must guard against a weakening of the values that make us who we are. That’s why, for the past eight years, I’ve worked to put the fight against terrorism on a firm legal footing. That’s why we’ve ended torture, worked to close Gitmo, and reform our laws governing surveillance to protect privacy and civil liberties. That’s why I reject discrimination against Muslim Americans who are just as patriotic as we are. That’s why we cannot withdraw from global fights – to expand democracy, and human rights, women’s rights, and LGBT rights – no matter how imperfect our efforts, no matter how expedient ignoring such values may seem.