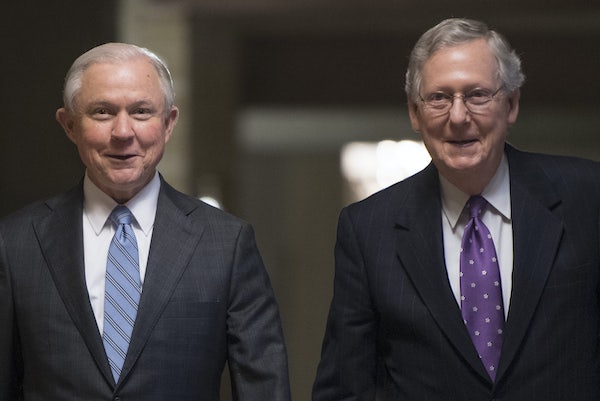 McConnell: Jeff Sessions is a civil rights exemplar because he once stood in close proximity to John Lewis.

Civil rights hero and Georgia congressman John Lewis took the noteworthy, symbolic step of testifying against Senator Jeff Sessions at his confirmation hearing to be the next attorney general. Sessions’s views and record on civil rights and other racially charged issues is troubling to liberals, and particularly troubling to members of the Congressional Black Caucus, which dispatched Lewis and other black Democrats to voice their concerns.

Republicans might object that the picture exculpates Sessions because it was taken during the 50th anniversary commemoration of the march on Selma. But a) that still doesn’t do any argumentative work, and b) it was clearly intended to neutralize the impact of Lewis’s testimony specifically.

This pre-election gem notwithstanding, McConnell’s tweet may be the first official GOP use of the “some of (my/his/her) best friends are black” fallacy since Trump won the presidency, and inauguration is still nine days away.