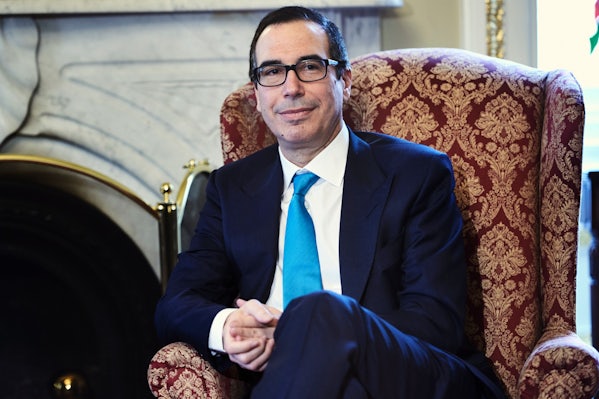 Trump’s team is delivering a warning to Steven Mnuchin.

Even in a cabinet chock full of controversial appointments, Mnuchin stands out. If you want to make the argument that Trump’s cabinet was designed to enrich America’s wealthiest citizens at the cost of everyone else, look no further than Mnuchin, who is the epitome of banking excess and corporate greed. Mnuchin’s former bank, OneWest, was a foreclosure machine, profiting handsomely off the housing crisis (it even went so far as to kick an old woman out of her home over a 27-cent debt). Mnuchin’s confirmation hearings were always going to be tough for both him and the incoming administration, because Democrats are keen to connect the two: Mnuchin, like Trump, wants to pick your pocket.

But Mnuchin apparently has done little to prepare. According to native advertiser Mike Allen and his new newsletter Axios Presented By Bank of America, Trump’s people are worried about how Mnuchin will perform and are generally annoyed by his preening ways:

Transition officials tell us they are worried about Steven Mnuchin’s readiness for his Thursday confirmation hearing to run Treasury. In early prep sessions, he came off as uneven and stiff, so extra people were brought in to help get him ready. (One spy at the transition office told me that all the suits surrounding a conference table during one of Mnuchin’s prep sessions made it look like a Fortune 500 board meeting.) And some insiders worry about how he’d react to demonstrators. Democrats hope to derail at least one pick, and Mnuchin still tops the list. Insiders weren’t thrilled when he leaked word of his selection and then went on CNBC to talk about it. So it’ll be interesting to see how hard Trump fights for this one, if needed.

Allen is a master of unintentional comedy. Referring to a friendly leaker as a spy, as if Axios Presented By Bank of America is cobbled together by the Master of Whispers, is a perfect Allen-esque self-aggrandizement. But more than anything, this graf feels like a message to Mnuchin being delivered through the media: Shape up, or we’ll cut you loose. That Mnuchin is behaving arrogantly is not particularly surprising, but that the Trump team would issue this kind of threat two days before his hearing is. Trump’s transition is not going well at all, and the last thing they need is for Mnuchin to become yet another symbol of a detached and corrupt cabinet.