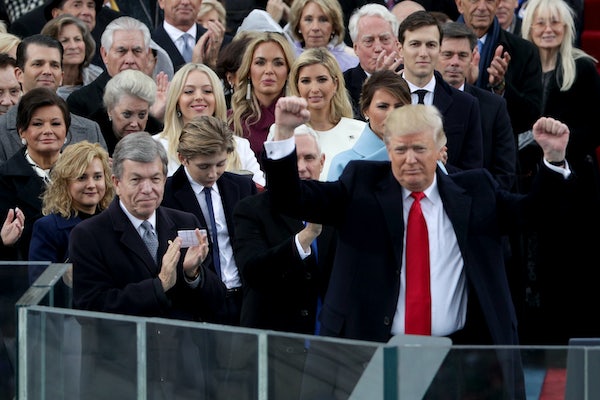 Donald Trump’s inauguration speech was aimed at his supporters and no one else.

Trump will enter the White House with the lowest approval rating in recorded history. The expectation from pundits was that Trump would use his inaugural address to try to heal the country’s wounds and assure America that he would be president for everyone—that he would finally put his campaign behind him and start to govern the entire country, not just the parts that voted for him.

For nearly a year now, pundits have been waiting for Trump to pivot. It never happened, of course. Trump ran the same campaign in the primaries that he did in the general election, emphasizing economic nationalism and white grievance, while presenting himself as the only man who could save the country from ruin. The speech he gave at the inauguration could have been given at any point over the past 18 months: It was combative, radical, and alarming. It was delivered in a pitch that usually sends his supporters into a frenzy.

“American carnage” is how Trump depicted this country, a dark, decimated place where “rusted-out factories [are] scattered like tombstones.”

For too long, a small group in our nation’s capital has reaped the rewards of government while the people have borne the cost. Washington flourished, but the people did not share in its wealth. Politicians prospered, but the jobs left and the factories closed. The establishment protected itself, but not the citizens of our country. Their victories have not been your victories. Their triumphs have not been your triumphs. And while they celebrated in our nation’s capital, there was little to celebrate for struggling families all across our land.

That all changes starting right here and right now because this moment is your moment, it belongs to you.

Trump set up a dichotomy in the speech: There was honest, hardworking America and there was corrupt Washington D.C., which stole the jobs and wealth of hardworking America and gave it to themselves and to foreigners. Trump promised those days were over. “For many decades, we’ve enriched foreign industry at the expense of American industry; subsidized the armies of other countries, while allowing for the very sad depletion of our military. We’ve defended other nations’ borders while refusing to defend our own.”

He claimed that he wrote his own speech, but it had Steve Bannon’s fingerprints all over it. Real America vs. Washington D.C. had a double meaning. It channeled the grievances of his voters, who are predominantly white and rural and hostile toward both elites and multiculturalism in general. Trump’s promise was to return America to them.