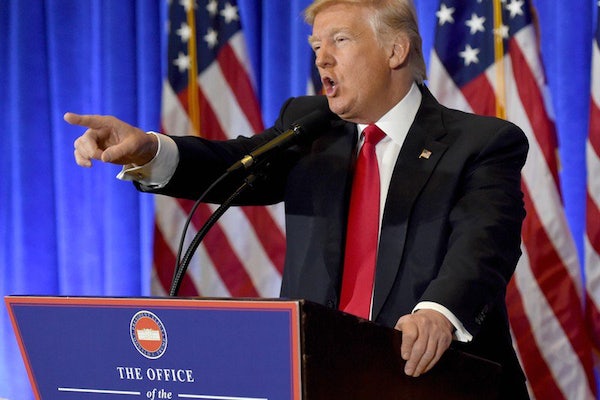 This dispatch about Trump’s sad, pathetic CIA visit proves we are entering the golden age of White House pool reports.

America’s brand spanking new President Donald Trump on Saturday visited the CIA headquarters, where he gave a speech that evinced no insecurities whatsoever. Here’s the unedited pool report from S.V. Dáte, a senior political correspondent for The Huffington Post:

The motorcade loaded up and is en route back to the White House at 1540. POTUS visibted with officials at the CIA headquarters and then delivered remarks for about 15 minutes. Transcript to follow, but highlights:

-- POTUS explained why CIA was his first visit: because the dishonest media has made it seem like he was having a feud with the intelligence community

-- He boasted that “probably everybody in this room voted for me ... because we’re all on the same wavelength.”

-- ISIS is evil and must be eradicated off the face of the earth.

-- He is very smart, and again pointed to his uncle the MIT professor. “Trust me, I’m like a smart person.”

-- Said that after meeting Mike Pompeo, he wasn’t interested in meeting anyone else for the CIA job.

-- critized yesterday’s mistaken pool report about the bust of MLK as further proof of the dishonest media.

The speech was attended by about 400 CIA employees in the lobby of its building in Langley, Virginia.