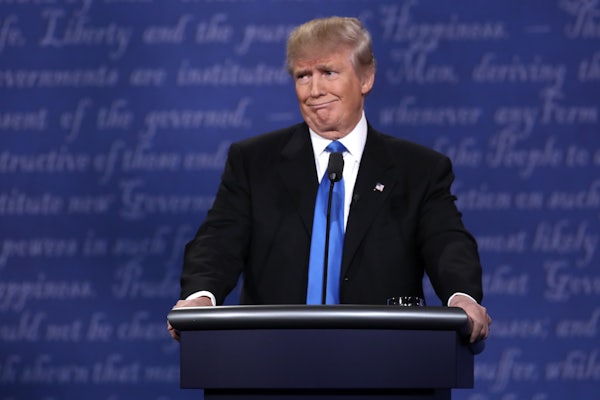 Via Kellyanne Conway, the Trump administration has announced that it intends to convert Medicaid to block grants, The New York Times reports.

Ms. Conway, speaking on the NBC program Sunday Today, said that with a block grant, “you really cut out the fraud, waste and abuse, and you get the help directly” to intended beneficiaries.

This is code for cuts to Medicaid. Conway did not clarify if states would be required to cover people with pre-existing conditions, or if they’d be required to cover any specific health care needs at all. Given her concern about “waste,” it seems like the answer is “probably not.” We also know that block grants typically correlate to reduced spending. The Democrats—specifically, Bill Clinton—already provided us an example: welfare reform.

Clinton’s Temporary Assistance to Needy Families (TANF) distributed assistance to states in the form of block grants. States had to adhere to certain programmatic guidelines, but they enjoyed significant freedom to disperse the funds as they pleased. The result? TANF severely cut the number of families receiving federal assistance. As Ryan LaRochelle noted at The Washington Post’s Monkey Cage blog, TANF funding has dropped by 32 percent since it was implemented in 1996. “Or to put it differently, before the federal government converted AFDC into the TANF block grant, 68 out of 100 poor families received cash assistance. By 2014, only 23 out of 100 poor families did,” he wrote.

And it wasn’t because TANF had lifted those families out of poverty. Deep poverty actually increased after TANF. According to a 2015 analysis by the Center for Budget and Policy Priorities, “the number of children in deep poverty rose from 1.5 million to 2.2 million” in the first decade of TANF’s life, and the increase is “directly attributable” to TANF’s erosion of the welfare state. Block grants, in other words, provided the federal government a way to cut spending, and allowed states to further reduce benefits available to low-income families.

The Trump administration is now poised to repeat these mistakes, and poor and sick Americans will bear the cost of their austerity obsession.