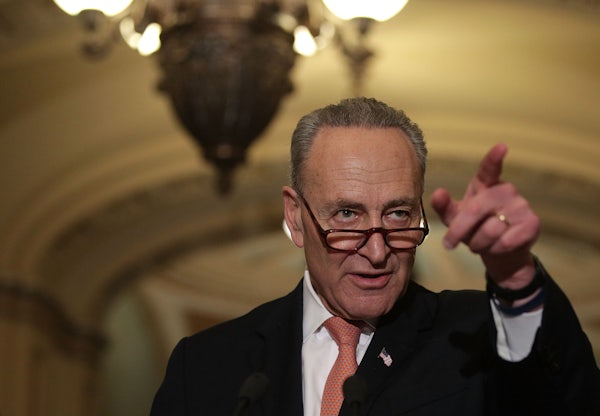 Democrats are messing this up already.

With Senator Kirsten Gillibrand’s vote to confirm Nikki Haley on Tuesday, there is no Democrat left that has voted “no” on every single Trump cabinet nominee. This week, Senators Elizabeth Warren and Sherrod Brown both voted to confirm Ben “Gifted Hands” Carson to lead a housing agency with a $47 billion budget. Fourteen Democrats—including Chuck Schumer and Tim Kaine—voted to confirm Mike Pompeo, who is open to using torture, as CIA director.

The explanation that Democrats have given for accommodating Trump is that they don’t wish to be seen as obstructionist, which would erode their ability to work with Republicans:

James Carville, a longtime Democratic strategist, emphasized that the overarching goal for the party is to stop the Trump agenda. And to do that, the party needs to ensure that “20 percent of congressional Republicans find it in their interest not to be with this guy.” You can’t make that case, Carville said, “if you’re against everything; then you are for nothing. You’ve got to pick and say, ‘This is what [Trump] is’ and drive that home.”

And, Democrats are also holding out for when they are back in power:

“We can’t very well be at a fever pitch on everything,” said Sen. Brian Schatz (D-Hawaii). “The door swings both ways in Washington. At some point we’re going to want a Democratic president to stand up a Cabinet. So we’re trying to be reasonable when the nominees are reasonable.”

On one hand, being the party of obstruction doesn’t fit as neatly into pro-government Democratic ideology as it does for Republicans. Democrats want government to work. But when the government is building walls, registering Muslims, and destroying the environment, obstruction is clearly the best option. It signals that this government is corrupt, bigoted, and stuffed with incompetents. It is a way to make the Trump administration as unpopular as possible. It is good politics and policy.

Democrats believe that by fulfilling a slogan—“when they go low, we go high”—they will somehow preserve the decorum and norms of U.S. politics. It is pure fantasy: These norms have been demolished over the last eight years and Republicans certainly won’t start adhering to them just because Democrats are. As this election has clearly shown, when we go high, we lose.