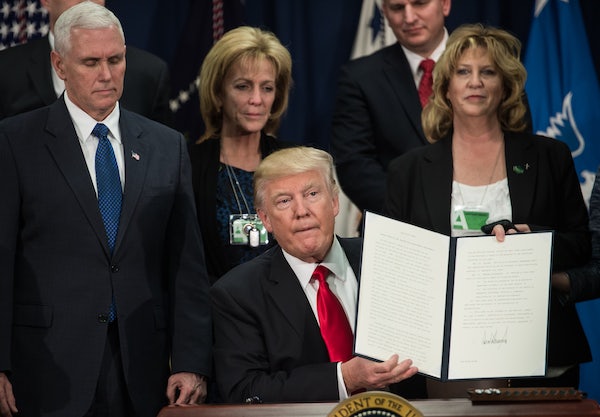 Donald Trump is going at a blistering pace. How long can he keep it up?

Judging by the flood of executive actions coming out of the White House—on immigration, torture, Obamacare, and a host of other controversial issues—you would have thought Trump had won the popular vote by ten million votes, instead of losing it by three million. The barrage of executive actions, most of which attempt to turn back the tide of the Obama years, tell us two things about Trump’s presidency.

The first is that, however plagued he might be by a sense of illegitimacy—and it seems to have become a Lady Macbeth-ish obsession—his inner circle is acting as if he has a mandate and they see the executive action as an important tool even though they control both houses of Congress. Trump himself has been burning the candle at both ends to keep up. But though he might be coming out of the gate strong, it seems unlikely that this pace will continue. Trump seems to be checking off boxes before getting bogged down in the two fights that will likely define his first year as president: the repeal of Obamacare and the nomination of a Supreme Court justice. It’s also highly likely that many of his executive actions will run into trouble in the courts, as many of Obama’s did, which means that the speed at which they’re being signed may not be a reflection of the speed with which he is rolling back the Obama years.

Which leads us to the second thing. Trump’s executive actions are sloppy. They’re poorly written—it’s often difficult to parse exactly what they mean—and they’re apparently being signed without the consultation of key cabinet members. According to Politico, Trump didn’t consult the State Department before authorizing the Keystone XL pipeline, and Defense Secretary James Mattis and CIA Director Mike Pompeo were “blindsided” by a draft executive order that would reinstate black sites and torture:

“The break-neck pace of Trump’s executive actions might please his supporters, but critics are questioning whether the documents are being rushed through without the necessary review from agency experts and lawmakers who will bear the burden of actually carrying them out. For example, there are legal questions on how the country can force companies building pipelines to use materials manufactured domestically, which might not be available or which could violate trade treaty obligations. There’s also the question of whether the federal government take billions from cities who don’t comply with immigration actions — legal experts said it was unclear.”

Trump and his closest advisers have almost no experience in government, executive actions are very new to them, and they seem not to be asking for help. That sums up Trump’s first week in office: a mix of frantic activity and ineptitude.