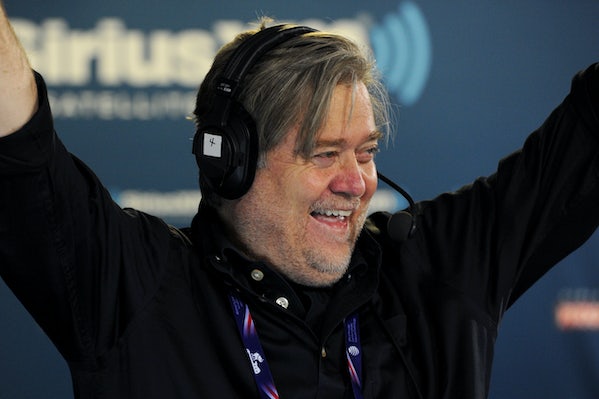 Steve Bannon wants to turn the press into the new Hillary.

It’s no secret that the former executive chair of Breitbart News hates the media. His career as both a media executive and as the brains behind the Trump operation has been defined by opposition to the mainstream media, which he regards as an organ of the elite consensus that has ineffectively run the country for decades. But on Thursday in an interview published by The New York Times, Bannon went a step further. “The media should be embarrassed and humiliated and keep its mouth shut and just listen for a while,” Bannon told Times reporter Mike Grynbaum.“I want you to quote this. The media here is the opposition party. They don’t understand this country. They still do not understand why Donald Trump is the president of the United States.”

Bannon characteristically expressed his distaste for the media in populist terms—as part of the establishment that he and Trump are trying to tear down. But by labeling the media—and not, say, the Democratic Party—as “the opposition party,” Bannon is also nodding to the Trump White House’s strategy. Trump’s approval rating is incredibly low for an incoming president, currently sitting below 40 percent. Over the past eighteen months, Trump has always had a foil: First, 17 wishy-washy establishment Republicans, then a Democratic challenger he was able to successfully brand as being corrupt and out of touch with the concerns of (predominantly) white middle and lower-class families.

Trump does not have a well-defined foil now—it’s certainly not Chuck Schumer, or any of the other Senate Democrats. Bernie Sanders remains an effective opposition figure, but he doesn’t represent the “establishment” that Trump has so successfully run against. Bannon’s gamble going forward is that the media can be that foil—this has the added benefit of discrediting the dozens of damaging reports about the Trump administration that are issued every day. The problem is that the press is an abstraction, not a flesh-and-blood political opponent. The idea that this will win over the majority of the country that is skeptical of Trump’s new regime seems far-fetched.