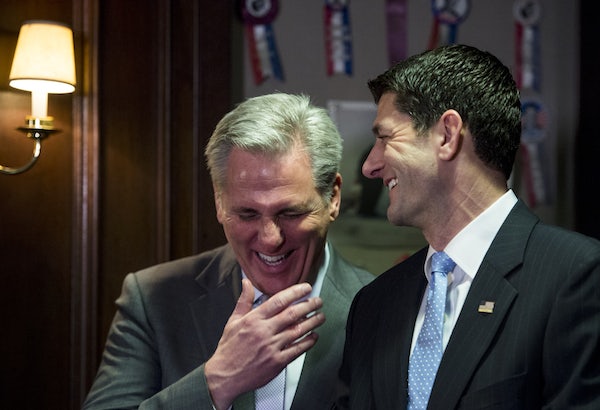 Insured Republicans want you to forego health coverage so that they’ll have an easier time repealing Obamacare.

On Thursday night, the Trump administration pulled paid-for television advertising and other forms of official public notice (social media, etc) about the looming deadline to sign up for insurance through Obamacare’s state exchanges. Here’s the ad that’s been taken down.

The potential consequences of this are plain and speak to intent. Open-enrollment ends on January 31; signups tend to surge near the deadline, and the composition of late enrollees tend to be younger and healthier; fewer reminders mean fewer signups, an older, sicker risk pool, and higher 2018 premiums, which will be announced in March. If the increases are greater than expected, Republicans will cite it as evidence that they inherited from Democrats a failing program that must be dismantled. They will turn their intentional mismanagement into misfortune for millions of Americans. Sabotage.

The good news is the law’s supporters are so rightly outraged by this that they’re taking on promotion duties themselves, and, with a little organizing, will limit the damage the Trump administration’s trying to do.

If anything, though, the level of outrage is insufficient. Consider:

Most members of Congress and their staffs must, by law, get insurance through the ACA, typically via Washington, DC’s health exchange. Does it strike you as likely that they—Republicans on Capitol Hill—will forego insurance, in order to weaken the market and trigger premium spikes? Do you imagine that they’ll tell friends and family members to miss the deadline, go without insurance for a year, to make the law easier to unwind? If the goal is to minimize enrollment, won’t they lead by example?

The answer is obviously no. This is about endangering your family in pursuit of political leverage. They want you to take very serious risks with your life so that it’s easier for them to get revenge for Obamacare. The purpose of pulling ads is to weaken the market by placing the risks of going uninsured (bankruptcy, death, etc) on to other people. It’s more disgusting than it looks.